Stranger in a Strange Land

For other uses, see Stranger in a Strange Land (disambiguation).

Stranger in a Strange Land is the first installment of the World of Warcraft comic.

When a human is found unconscious on the shores of Kalimdor, with no memory of who he is or how he arrived there, how will he survive? Enslaved by an orc shaman, he must fight for survival against members of both the Alliance and the Horde. Will he strike the uneasy balance with the other races he'll need to find the secrets of his past? 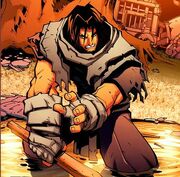 The story begins with a caravan heading through the wastelands of Durotar. The orcs of the caravan run a successful business fighting gladiators in the arenas of Azeroth, but they've just lost their prize champion (Bloodeye Redfist) at Dire Maul. Suddenly, they see a lone, unconscious human on the shore of Bladefist Bay. The survivor is quickly approached by a crocolisk, and seemingly about to be devoured when he rears up and begins fighting the massive reptile. The orcs, true to their business, start betting on the winner. Their boss, Rehgar Earthfury comes out to tell them to get a move on when he sees the human's struggle and joins in the betting.

The man is strong and agile, and eventually kills the crocolisk (who Rehgar attacked too, only to discover it hadn't been necessary since the human already killed it). Rehgar asks the man his name, and the man replies that he can't remember anything. In light of this information, Rehgar smiles and Frost Shocks him into renewed unconsciousness. The orcs throw the human into a cage. Although Broll Bearmantle, one of the caged gladiators, warns Rehgar that he's "playing with fire", Rehgar, suspecting that the man may be an army deserter, feels confident enough to use him as his new gladiator without worrying about Alliance reprisal.

The human awakes a few hours later in his new home (a cage). His companions in captivity introduce themselves as Broll Bearmantle, a night elf druid, and Valeera Sanguinar, a blood elf rogue. Valeera tells the human that they're going to Orgrimmar to become gladiators, and that Broll is one already. Broll and Valeera immediately start fighting (a recurring trend). Neither elf is grateful for their counterpart's presence, Broll seeing Valeera as an untrustworthy, betraying, magic addict blood elf, Valeera seeing Broll as weak and subservient.

The human comments that Valeera is too young to be a gladiator, and she spits back at him that she was old enough to survive on her own after bandits killed her family. She survived the bandits and the Scourge, but was caught and thrown in jail after trying to steal a shaman's talisman. Rehgar bought her from the jail and took her for gladiator training. After more argument between the two elves, the caravan arrives at Orgrimmar.

In the Orgrimmar arena Rehgar tells Valeera and the human that he'll help them channel their inner fury into fighting prowess. They start off by having Valeera and the man fight Broll. After Valeera taunts Broll about the size of his staff, Broll shifts into bear form and they have at it. The human, however, stands on the sidelines and refuses to fight. Another gladiator team -- a tauren, troll, and an undead managed by a goblin -- watch the human and wonder what he's up to. They plot to fight Valeera and Broll so that they won't be well enough to win the Dire Maul tournament.

At night, the gladiator trio huddle around a fire in a dungeon cell. Broll says that they'll never become a team, since the human, now dubbed "Croc-bait", won't fight and he and Valeera just want to fight each other. Valeera tells the human that Rehgar picked them to be gladiators since they reminded him of himself in some way. She also tells him that his amnesia seems to be caused by dark magic. Broll offers up an orc meditation remedy, and the man has a brief flash of memory -- he's a child, alone in a burning and collapsing city.

When he comes out of the fugue state, Valeera and Broll are fighting... again. Broll lays into Valeera about the blood elves joining the Horde, enraging her. As the other two sleep, Valeera broods about being betrayed by Garithos, siding with Illidan, and being magic-addicted since birth. The next day, she decides that Rehgar, not Broll, is her true enemy, and that she'll kill him when she gets the chance -- but she still has a plan to show Broll up. She casts a spell on him...

As the protagonists prepare to train in the arena, the goblin-managed team shows up and tells them to get off the field. The troll calls them "nature luva, coward and turncoat", which sets off Valeera's temper. She stabs the undead and the teams get to fighting. Valeera holds up pretty well against what Broll calls her new Horde allies, but Broll is having some issues -- he can't shift into feral forms, and as a feral druid, he's pretty much useless. Valeera realizes that Broll's problems are from her Mana Tap spell the night before and runs to save him from the tauren, who easily smacks them both out of the way.

Meanwhile, the human hacks off the hand of his troll opponent, decapitates the undead, and stabs the tauren in the shoulder. Valeera runs up, hugs him, and thanks him for saving Broll. Broll is mighty pissed about Valeera draining his energy, and it looks like they're about to fight again when they're faced with a new opponent. Rehgar has brought in an exceptionally large orc to test his team.

The huge orc heads over to kill Broll when Valeera runs at him screaming. The orc breaks Valeera's arm and throws her into the corner. The human pulls out his sword and tells the orc that the elves are under his protection, telling the orc to throw away his sword or die. As the orc and Croc-Bait get to fighting, Rehgar grins, knowing that he's set up a great arena team.