Strom'kar, the Warbreaker is the artifact two-handed sword used by arms warriors in World of Warcraft: Legion. It previously belonged to King Thoradin, the barbarian warlord who first united humanity and founded the nation of Arathor, and was lost while it was being used to subdue the C'Thraxxi monstrosity, Zakajz the Corruptor, in a forgotten tomb beneath Tirisfal Glades.

Strom'kar is obtained by level 98 warriors from the quest

[98 - 110] The Sword of Kings, given by Odyn in Skyhold, and serves as the arms warrior's artifact weapon for World of Warcraft: Legion.

This greatsword was borne into combat by the barbarian warlord who first united humanity under a single banner, founding the nation of Arathor. A master tactician and strategist, King Thoradin went on to play a critical role in ending the Troll Wars. Later the sword was lost while it was being used to subdue a C'Thraxxi monstrosity in a forgotten tomb beneath Tirisfal. Abandoned and all but forgotten, Strom'kar has been slowly drinking from the shadowy power there over thousands of years.[1]

The first king of the humans, Thoradin, was a mighty ruler and a mighty warrior. He carried with him a greatsword forged by vrykul, empowered by elves, and bloodied on the fields of countless battles. Strom'kar, ender of wars, was lost with Thoradin. One strong enough to recover the sword would bring to bear a blade unlike any seen in the ages since.[2]

Main article: Saga of the Valarjar

Human history is not complete without mention of Strom'kar. With this blade, a visionary warlord named Thoradin united his race into a single nation. He led his people to victory against the trolls in one of the greatest wars humankind has ever fought. He changed the destiny of the world. Strom'kar's story is one of violence and bloodshed, of cunning and desperation. And, ultimately, of bravery and sacrifice. 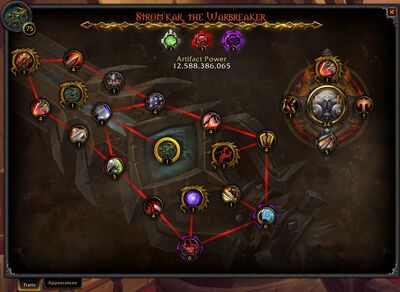 Upgraded: Vengeance of the Fallen

Challenging: Blade of the Sky Champion