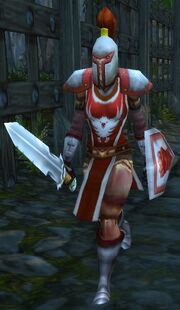 The militia was active during the Second War and was led by captain Danath Trollbane.[1][2]

The militia still existed, being based in Refuge Pointe but also being firmly entrenched in the chapel district[3] of Stromgarde Keep itself. Sigil Fragments protecting the tomb of Thoras Trollbane were dispersed among their ranks.[4] The militia also had placed bounties on the heads of Lord Falconcrest and his bodyguard Otto.[5] In return, the Syndicate had placed bounties of the badges worn by the members of the militia.[6]

Like all of the Stromic people still in Stromgarde Keep, the members of the militia were now undead and serving Galen Trollbane.[7] The militiamen who opposed the Knights of the Ebon Blade were slaughtered by the death knights.[8]