For the achievement, see Troll Hunter. 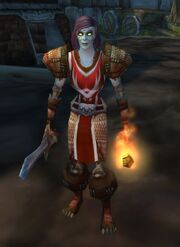 Stromgarde Troll Hunters are humans that can be found in Stromgarde Keep in the Arathi Highlands.

Since fires can prevent trolls from regenerating their wounds,[1] they probably carry torches to burn their forest troll archenemies.

When the Knights of the Ebon Blade made their way to Stromgarde in order to resurrect the dead King Thoras Trollbane, Troll Hunters were among the undead defenders of the city. While neutral at first, they attacked the Knights when Prince Galen gave them the order.