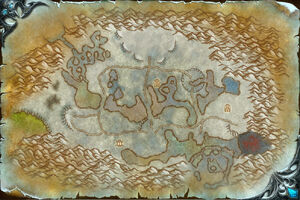 It houses the north easternmost Goblin Workshop, where siege weapons can be built.

At the beginning of the battle, this workshop is in control of the defending force.

Offensive: As it is the nearest workshop to the Alliance portal, when the Alliance are attacking, the raid lead should send at least one group to capture this workshop first, whilst others are gaining the rank necessary to build the machines.

Defensive: As this is near the fortress, one raid lead should ensure that sufficient players are allocated either to remain at this workshop to defend it from horde attacks (which may be a thankless and unnecessary task), OR designate it as a primary duty for at least one group, who will spend most of their time elsewhere but keep an eye on the warnings for "Sunken Ring is under attack" and ride for the workshop to defend it.

Defensive: As this is near the fortress, this is a lower priority, after capturing The Broken Temple and destroying the southern towers to reduce the time the Alliance have to capture the fortress. This is because it is likely to have a high number of alliance players in the area and therefore a suicide mission unless tenacity levels are particularly high.