Sunwalker Dezco is a prominent tauren Sunwalker[1] and the chieftain of the Dawnchaser tribe. He was dispatched by Baine Bloodhoof to the myth-shrouded land of Pandaria. He is a quest giver and major character during the Krasarang Wilds storyline.

According to Dezco, the tauren of Thunder Bluff had dreams of a valley, golden with blossoms, filled with the hope of peace. Baine Bloodhoof ordered Sunwalker Dezco and his Dawnchaser tribe to sail into uncharted waters in search of this mysterious place. During the sailing, storms caught them, destroying three ships with Dawnchaser tauren. Guided by the visions of Dezco's pregnant wife, Leza, the last vessel was able to find Pandaria and landed on the southern shore of Krasarang Wilds. All in the group now felt a pull to the north. The influence of the sha, however, was felt acutely by the tauren, and Leza fell ill shortly before childbirth. After heading inland by canoe, the group set up camp at Thunder Cleft, stymied by the Winds' Edge cliffs. Dezco sent Leza's brother Chezin to look for allies, but he found only mogu, and died from their poison. Increasingly desperate, Dezco tasked adventurers with finding herbs and magical water to help his wife. However, although Leza's twin sons were safely delivered, Leza did not survive the childbirth.[2]

Dezco later helped the pandaren of Stoneplow and witnessed his old friend Kor Bloodtusk being killed by Groundbreaker Brojai. With the help of adventurers, he defeated Brojai, and traveled to Stoneplow in the Valley of the Four Winds where he is found aiding in the battle against the mantid. Dezco is later seen in the Temple of the White Tiger in Kun-Lai Summit guarding the human prince Anduin Wrynn, after which he witnessed the opening of the gate to the Vale of Eternal Blossoms. Dezco is later seen in the Horde Capital city of Shrine of Two Moons located near the flight master in the Golden Terrace in the Vale of Eternal Blossoms, acting as the city's de facto leader.[3]

When Dezco reached the Vale of Eternal Blossoms he brought his newborn sons, bearing the weaning names Redhorn and Cloudhoof, to the Shrine of Two Moons, where they were nursed by his wife's cousin Nala. The Golden Lotus learned that a child within the Vale was destined to join their order, but after testing several pandaren children at the Shrine were unable to locate the child. Chi-Ji then appeared and found his way to Dezco's sons, announcing that one of them was destined to serve the vale. While Zhi the Harmonious was shocked at the selection of a non-pandaren child, Dezco was left to decide which of his sons would remain with him, and which would be taken by the order. However, unwilling to see either of his children taken from his care and raised away from his tauren roots, Dezco decided to instead quietly leave the Vale and return to Mulgore, refusing the order's request but honoring his late wife's dying wishes for him to watch over their children.

His path home blocked by the encroaching Shao-Tien mogu at the Gate of the August Celestials, Dezco joined a group of refugees to travel south to Mistfall Village, in search of another exit from the Vale. However, by nightfall the group encountered Mokimo the Strong, Weng the Merciful and Rook Stonetoe of the Golden Lotus, who had been sent to intercept Dezco. While Dezco was suspicious that the party had been sent to persuade him to return, Mokimo told him he was free to leave, insisting that they had come only to protect Dezco and his children, and imploring him to return to the safety of the Shrine of Two Moons - but Dezco refused to return. That night, the group was attacked by quilen, and Redhorn was torn from Dezco's body and carried away. Ignoring Mokimo's pleas to allow him to carry Cloudhoof to safety, Dezco gave chase and found Redhorn in the grasp of a group of Shao-Tien mogu. A fierce battle ensued, and at the last second Mokimo placed himself between Redhorn and the mogu leader's poisoned blade, suffering a grievous wound in order to save the child. However, in the heat of battle, Dezco failed to notice his second son Cloudhoof, apparently safe at his side, crushed in his basket.

With one child dead and the other dying from the mogu's poison, Dezco and Mokimo made their way to one of the Vale's sacred pools, the pool of hope. Forced to leave Cloudhoof at the waters' edge, the two invoked the powers of the vale to heal the child. A vision of Chi-Ji appeared, reviving Redhorn and healing Mokimo, but vanished before Dezco could plead for him to help Cloudhoof.

As Dezco battled with his grief and a sense of guilt in the death of Cloudhoof, Mokimo offered to assist him in his wishes to return to Mulgore, assuring him that he would find a passage home for the two of them, whatever it took. However, amazed by the order's love and concern for his children, and stirred by Mokimo's speech of home, Dezco realized, at last, the true meaning of his wife's visions concerning the Vale, and gave Redhorn to Mokimo, saying goodbye to his only child and his last connection to his wife, in the knowledge that this was, in fact, the true reason for his tribe's journey to the Vale.

Landfall and The Thunder King

Two months later, the Horde navy was about to make landfall in the Krasarang Wilds and Dezco sent adventurers to assist the Horde.

Dezco later traveled to the Tavern in the Mists, and was granted an audience with Prince Anduin and the enigmatic Wrathion. He later took up arms with the Sunreaver Onslaught and accompanied the blood elven force to the Isle of Thunder. He and Archmage Aethas Sunreaver see to dismantling the local saurok presence.

Under Warchief Hellscream's orders, a Horde excavation force laid waste to sacred ground in the Vale of Eternal Blossoms, in an attempt to unearth yet more dangerous artifacts of use to Garrosh's cause. In retaliation, Taran Zhu confronted Dezco at the Shrine of Two Moons, and ordered him to leave the vale, threatening to use lethal force should the Horde not comply. Dezco was able to stall Zhu's wrath, informing him that the man responsible for this travesty no longer speaks for the rest of the Horde, and that indeed, many are now rising up against him. Dezco promised to bring Hellscream to justice, asking only time to make it happen.

No stranger to dealing with tyrants, Zhu warily allowed Dezco the chance to make things right, giving the Dawnchaser chieftain until the end of the season to make good on his promise.[4]

After the defilement of the Vale, Dezco, Nala, and a group of Dawnchaser Braves joined with Golden Lotus Defenders and stood in front of the Shrine of Two Moons. Dezco later participated in the Siege of Orgrimmar, battling the Kor'kron orcs in the halls of the Underhold.

Seeking redemption, Dezco travels alone without his clan to Frostwall Tavern / Lunarfall Inn on Draenor. Researching the way the fanatic Adherents of Rukhmar worship the light in different ways than the Sunwalkers, he seeks a Sun Crystal in order to see its light. The Sun Crystal seems to fill Dezco with warmth and comfort, lessening the pain he feels for the loss of his family. However, later Dezco shows he is becoming addicted, asking for more crystals and saying each day feels darker the longer he is without one.

Dezco joined the Silver Hand and is located in the Sanctum of Light.

Dezco crossed the veil to the Shadowlands and can be found in Oribos, hoping to find the souls of Leza and Cloudhoof. He greets the adventurer as a familiar face and asks them, if they see Leza, to tell her that their son Kor is growing strong and that Dezco will always love her. 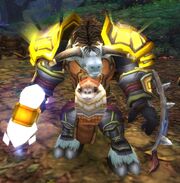 It has not known the light for many, many generations.

My wife, she is suffering, and none of my abilities are able to help her.

We were called.
We sailed deep into uncharted waters, at first on orders from High Chieftain Baine Bloodhoof.
It was my wife Leza whose visions gave us a course to sail by.
But when we saw the wall of mists, we all began to feel the call like a voice on the wind. North. The voice calls for us to travel north.
We came ashore, dismantled our ship, and sailed up river by canoe until we hit the cliff you see before us.

My wife, Leza, is in labor and fighting a fever.
This cursed jungle is sapping all of our strength. It could be something in the water.

It was Leza's visions that led us here. Each of us have had dreams of a valley, golden with blossoms, filled with the hope of peace.
Even our chieftain Baine Bloodhoof had these dreams.
Only Leza's visions gave us a path to follow, though. And now, here we are, for better or worse.

[86] Life)
The visions we had failed to mention this event.

Dawnchaser Retreat
We live, we fight, we die. The tricky part is finding a reason to do each of those.

Indeed! The young one on my chest is named "Kor", for my oldest friend.
And this young champion on my back is named "<name>", for his savior.

Gate of the August Celestials
We are all here. This is a historic moment, <name>. My dying wife envisioned a city of light beyond these gates. What do you think we will find?

In the Tavern in the Mists, with Wrathion and Anduin Wrynn
Greetings, <class>!
Chieftain Baine Bloodhoof was distressed to learn of Garrosh's savage attack on the human prince. Our causes for grievance against the Alliance are many, but none are the responsibility of this little one.
The prince and I met at the Temple of the White Tiger. On my honor I have pledged that I will do what I can to keep him safe.
<Despite his words and the warmth the prince directs his way, the tauren paladin suffers distrustful glances from the royal bodyguards in the corner of the room.>

I swear by the power of An'she, these Kor'kron whelps will not pass.

Garrison
So much death in this land...

The High Chieftain asked for me to join him in this negotiation.

The Highmountain tribe is spoken of in our legends and remembered with reverence.

It was important that we show respect for such an ancient tribe.

Gossip
It is a relief to see a face from Azeroth here in this strange place.
When I learned the veil to the Shadowlands had been shattered, I knew I had to cross over. No matter the risk.
You see, I... lost two of those who were dearest to my heart. I must know if they are safe with our ancestors, or if their spirits are imperiled.
Please, I beg you, if you encounter the soul of my wife, Leza Farwalker, tell her our son Kor is growing strong. Tell her I love her. Always.
And that whatever it takes, I will find her.