The Sunwell Plateau is a raid instance located on the Isle of Quel'Danas north of Silvermoon City. 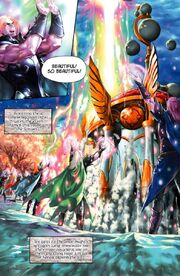 Nearly seven thousand years ago, the Highborne were exiled from Kalimdor for refusing to give up arcane magic. Led by Dath'Remar Sunstrider, these elves founded their own kingdom of Quel'Thalas. For millennia the mystical pool of energy known as the Sunwell fueled the potent magic of the exiled high elves. Now, the remnants of this ancient fountain have become the Burning Legion's latest target as the demons prepare to summon their commander, Kil'jaeden, with the Sunwell's energy.

Heroes from Shattrath City have joined under the banner of the Shattered Sun Offensive, endeavoring to crush the Legion's invasion before it becomes insurmountable. More combatants join the Offensive every day, but the might of the Legion cannot be easily suppressed. Fierce demonic servants guard the Sunwell Plateau, attacking anyone who interferes with their proceedings. As the time of Kil'jaeden's arrival draws near, Azeroth's heroes have one final chance to save their world from blistering devastation.[1]

Shattered Sun Offensive invaded Quel'Danas and waged war against the Legion, delaying Kael'thas' spellwork. Adventurers of the Alliance infiltrated the Sunwell Plateau and fought against Legion demons, Sunfury elves, and felblood elves. They also rescued and defeated prisoners such as the blue dragon Kalecgos, controlled by the nathrezim Sathrovarr, and the naaru M'uru. Entering the Sunwell chamber, Kil'jaeden rose from a rift in the Sunwell's depths before the Alliance's eyes. They fought hard, but it was eventually Anveena Teague who turned the tide. She sacrificed herself, using her remaining energy against the demon lord. The Alliance then managed to banish the weakened Kil'jaeden and close the gateway. The Sunwell laid tainted again, threatening to corrupt blood elves once more. Although Lor'themar Theron considered destroying the corrupted Sunwell, another solution presented itself. Velen had arrived to the halls, paying respects to the fallen naaru M'uru. However, he sensed in its heart a glimmer of power, so he used it to cleanse the Sunwell, transforming it into a font of Holy Light and arcane magic.[2] In the wake of Kil'jaeden's fall, a lot of powerful artifacts were found and stored.[3]

As with Quel'Danas, the plateau was eventually taken by the sin'dorei. They allowed high elves to make pilgrimages to the site of the Sunwell.

The instance contains both outdoor areas and building interiors, where players will find captured naaru, which are the primary power source of the town, and inside the final building the Sunwell itself.

The Sunwell Plateau is tuned for Tier 6-geared players and the gear that drops from the first three bosses are additional Tier 6 items (boots, belt, and bracers), and non-set epics as well.

The instance was open to players right from the start of patch 2.4, but the last 3 bosses were only available as each gate - which blocked the next boss encounter - opened over a set period of time on all servers. (Although this happened on maintenance day, so the US had an apparent one day advantage over the EU servers)[4] The first gate was opened on 8 April 2008 in the US, two weeks after the patch went live. The second gate opened after weekly maintenance on April 29, 2008. The third and final gate was opened on May 20, 2008 on US realms. The difficulty of the instance was set at the first 3 bosses being on par with Tier 6 encounters, and then the last three and increasing from each.

During the Quel'Delar quest chain players are visiting a heavily phased version of Sunwell Plateau once again.