Suramar (or the (elven) kingdom of Suramar)[1][2] is nestled in the eponymous region on the Broken Isles. It is strewn with lush and colorful flora, covering almost every cliff and crevice. Ancient Highborne towns cover much of the landscape, now inhabited by fouler creatures.

Suramar is the realm of the nightborne, currently led by their First Arcanist, Thalyssra, following the fall of the old regime. Its capital is Suramar City, almost all of the roads in Suramar lead here.[3]

The War of the Ancients brought with it a great deal of change, both for the night elf race and Elisande's Highborne. Through a desire for greater power, Queen Azshara and the Highborne in the capital of Zin-Azshari allied themselves with the demon lord Sargeras and his Burning Legion. Having aided in the creation of a portal for the Legion to reach Azeroth, the queen and her retainers watched as the demons began spread across the kaldorei nation, destroying all they encountered.[4]

Although Elisande and her Highborne associates in Suramar remained loyal to Queen Azshara, they became increasingly troubled as the Legion's invasion continued. Looking to the vast destruction caused by the demons, Elisande grew to deeply distrust them, fearing that their actions were not in the night elves' best interests. Eventually, she discovered that the Legion planned to create a large gateway to the Twisting Nether within Suramar itself. Elisande was horrified at this development; if the portal were opened, innumerable demon reinforcements would spill into Azeroth and quickly overwhelm the Kaldorei Resistance that was attempting to withstand the Legion's onslaught. It was Elisande's belief that the gateway would also destroy the city and its inhabitants in the process, and resolved to act. 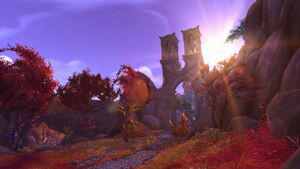 The Ruins of Elune'eth, a massive gate found in Suramar.

Suramar was the location of the Temple of Elune, the central place of worship for the night elves. The high priestess of Elune lived in the temple. The Boughs of Azshara, Izal-Shurah and Arauk-Nashal were also located here.[5]

Just before the War of the Ancients, Broxigar was held captive in Suramar City until he was freed by Malfurion Stormrage. During the war, the Legion's efforts in the city were led by the pit lord Ronokon.[6] The city was attacked and ravaged by the Burning Legion. Suramar was subsequently used by the nathrezim in an experiment to create an army of the undead, an experiment which laid the groundwork for the Scourge ten thousand years later.[7] The Burning Legion attempted to open a second portal besides the one at the Well of Eternity in the Temple of Elune in order to attack the night elves on two fronts. The resident Highborne used the Pillars of Creation to close the portal and put several seals on the temple.[8] The Wild God Ashamane battled Ronokon in Val'sharah just outside Suramar and sacrificed her life to kill him. In doing so, she was able to buy the elves the time they needed to craft a shield around their city.[6]

Most of Suramar was blasted to the bottom of the Great Sea during the Sundering. However, some of it remained above shore in the Broken Isles due to the efforts of the resident Highborne, who crafted a magical shield that kept a section of their city together. This shield would stay up for 10,000 years, as the Highborne believed the world outside of Suramar City had been destroyed. Under their shield they would evolve into the Nightborne, reliant on their source of power, the Nightwell.[9] While the city was shielded, it was "probably next to impossible for normal Nightborne to leave."[10] Much later, dwarves recovered a Highborne Astrolabe from the undersea ruins of Suramar.

The sunk Temple of Elune in Suramar City was later used by the Guardian Aegwynn to hold the physical remains, Jeweled Scepter, and Eye of Sargeras, which led to the building's more familiar designation, the Tomb of Sargeras. 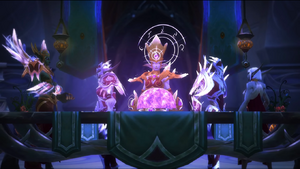 Suramar's ruling elite, with Grand Magistrix Elisande in the center

Several years later, the alternate Gul'dan was sent by the Burning Legion to act as their ambassador to the Nightborne and their Grand Magistrix, who has pledged herself and her people to the same demons she stood against in defiance of Azshara 10,000 years ago. Not all Nightborne agree with Elisande's decision, though they keep their disagreement a secret. With loyalists and demons marching together in the streets of Suramar, fear and distrust grips other elves' hearts and family turns against family.[11] The flame of the Shal'dorei flickers and heroes must arise to re-ignite it and stir the noble hearts of these once brave night elven group. 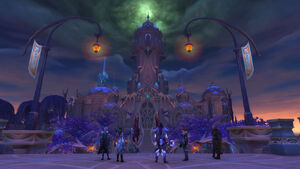 The rebellion was formed in opposition to the Grand Magistrix's decision to allow the demonic Burning Legion access to Suramar City and the sacred Nightwell in exchange for sparing the lives of the city's denizens.

Although small initially, the rebellion began to grow in numbers and power due to both outside assistance in the form of class orders, and the callous policies of Elisande. The movement was based from the underground complex of Shal'Aran in western Suramar, and was in open conflict with the Grand Magistrix's larger forces based out of Suramar City.

The insurgents' ultimate goal was the overthrow of Elisande's regime, and the expulsion of all demonic forces from the city. The rebels largely used covert tactics, working to weaken the regime in Suramar from within while gaining the support of the city's populace.

Having secured immense gains, and enlisting the aid of the Kirin Tor, night elves, high elves, and blood elves, the rebels eventually launched an assault on the city itself, and even succeeded in laying siege to the Nighthold, Elisande's seat of power and location of the Nightwell. With their allies in tow, the Nightfallen staged a final assault on the citadel, seeking to end the Burning Legion's grip on Suramar permanently. Within the Nighthold, they would defeat both Elisande and Gul'dan, gaining full control of Suramar and finally liberating the nightborne people.

Shortly after the victory in the Nighthold, Thalyssra returned to the palace to deal with the urgent question of what to do with the Nightwell. Accompanied by Oculeth and Valtrois, the First Arcanist would discover that the font of power was unstable, and dying without the Eye of Aman'Thul.[12]

Valtrois would suggest stabilizing the Nightwell, allowing the nightborne to harness its powers once more though they were no longer addicted to them. Ultimately, however, Thalyssra decided to allow the font to die, arguing that the Nightwell belonged in Suramar's troubled past and that the future and destiny of the nightborne now lay instead with Azeroth. Witnessing the decision, Lady Liadrin and Tyrande Whisperwind were satisfied by the outcome.

In the wake of the devastation wrought by the conflict, Thalyssra and the Nightfallen established a new government over Suramar City from the Nighthold. The Dusk Lily of the rebellion would become the insignia of the now-liberated nightborne race, marking a new chapter in Suramar's history.

A group of hunters led by Nighthuntress Syrenne joined the Unseen Path.

The Legion invasion hugely changed the political scene of Suramar. With the fall of the old regime, many political decisions were made to fill the voids left. 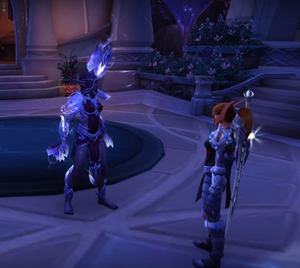 Meeting at the Thalyssra's Estate

Since the joint elven effort to oust the Burning Legion, Thalyssra has maintained good relations with the blood elves through her positive interactions with Lady Liadrin, and from this has established an alliance between Suramar and Silvermoon. Liadrin's Horde allies can be seen assisting in Suramar's rebuilding efforts.

When Sylvanas Windrunner summoned the Horde's leaders to seek out new allies, Liadrin suggested the nightborne; Sylvanas, intrigued by what Suramar's strength and resources could bring to the Horde, approved. Liadrin and the Horde champion then travel to Thalyssra's estate to offer the first arcanist a formal invitation to Silvermoon City on behalf of Quel'Thalas' ruler, Lor'themar Theron. While there, Liadrin and Thalyssra discuss the advantages of membership in the Horde. One of several pertinent factors for Thalyssra is to ensure her people enjoy the freedom to affect the world while upholding their traditions, which she feels is not offered by the Alliance. Thalyssra further reflects on her comparatively sour relations with Tyrande Whisperwind and the kaldorei, who while natural allies to her people on the surface, proved otherwise due to "arrogance and mistrust." The first arcanist conjures a brief reenactment of her exchange with Tyrande during the events leading up to the siege of Suramar to illustrate such, and then readily accepts the invitation to Silvermoon and hopes to inquire about a place for the nightborne in the Horde.

Accompanied by Valtrois and Silgryn, Thalyssra meets the regent lord of Quel'Thalas in his palace; she and Lor'themar quickly take to one another, each insisting that friends call one another by their first names. Lor'themar then leads the nightborne retinue to the Sunwell, and Thalyssra observes its properties, contrasting it to the Nightwell. During the visit, Lor'themar's other guest, Alleria Windrunner, inadvertently draws a group of void beasts to the Sunwell, who overwhelm the plateau's guardians and attempt to corrupt it. Thalyssra, Valtrois, and Silgryn join the battle, and the first arcanist adds her magical strength to that of Alleria and Rommath to close a huge rift portal looming above the Sunwell.

In the battle's aftermath, Thalyssra, impressed by the regent's dedication to his people and seeing that the Horde has allowed the sin'dorei to uphold their own ancient traditions, formally pledges the allegiance of Suramar to the Horde.[13][14][15]

The true nobility that saw the night elves secure their city from the Legion in the War of the Ancients is not totally absent from this great civilization even today with demons walking the streets freely. While there are some noble houses amongst the nightborne who support the cause against the Legion, albeit in secret and operate more sincerely and above board in their dealings with each other; there are others to contend with who use fear and coercion as their tools, and so requiring stronger responses.[16]

The harp is favored by the aristocracy, a somewhat delicate instrument.[17]

Whether Grand Magistrix is the official title held by the kingdom's leader is unclear, as Thalyssra did not assume it after deposing Elisande; she retains her old title of First Arcanist even as Suramar's head of state. Elisande was also referred to as the nightborne queen by Thalyssra,[20] in the vein of other Highborne rulers who bore monarchical titles, although this has not been mentioned since.