For the subzone, see Surge Needle. 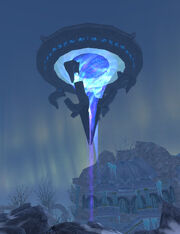 The Surge Needle hovering over the Moonrest Gardens.

Surge needles are massive constructs that aid in the redirection of ley lines for Malygos.[1] They look like giant floating rings. They are constructed out of stones from Coldrock Quarry.

Surge needles are massive needles constructed of arcane energy. By opening the Focusing Iris with his own blood Malygos had been able to direct powerful surge needles, using them to pull arcane magic from Azeroth’s ley lines and channel that magic into the Nexus.[2]

The Ethereum would later use them to retrieve Void energies and become void themselves.[6]