Not to be confused with Talia. 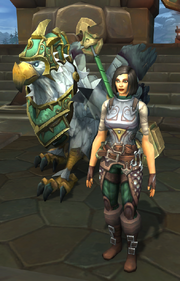 Taelia Fordragon, nicknamed Tae,[4] is the daughter of Bolvar Fordragon and the ward of House Proudmoore.[5] A cadet of the Proudmoore Guard,[1][2] Taelia is also the squire of Cyrus Crestfall, a former knight who was entrusted by Daelin Proudmoore himself with taking care of Bolvar's child.

Taelia serves as one of the main supporting characters in the Alliance storyline on Kul Tiras.

Taelia comes from Lordaeron, and is the daughter of the former Regent Lord of Stormwind, Bolvar Fordragon. When the Scourge hit Lordaeron, Taelia lost her mother, and her father sent her to Kul Tiras to be raised away from the war. There, Lord Admiral Daelin Proudmoore tasked one of his most trusted knights, Cyrus Crestfall, with raising the girl.[6] Cyrus taught her how to fight, how to ride, how to sail. By the time she entered the Proudmoore Guard, she was already better trained than some of her instructors, which they didn't appreciate. He also taught her how to deal with thugs, bullies, and "scum" like pirates. When they hit them, they would hit back twice as hard.[7] Even though they were apart, Bolvar still wrote letters to Taelia, "my shining star" as he called her, until one day they stopped coming.[3] Taelia didn't know much about her father's fate, just that he was a Stormwind knight who gave his life fighting the Lich King.[6]

When Jaina Proudmoore returned on a diplomatic mission to Kul Tiras years after Daelin's death, Taelia was in the crowd that witnessed her being taken by the guards to face judgment from Katherine Proudmoore for betraying her father.[8]

Sometime later, Taelia and the hired Flynn Fairwind helped the Alliance emissary, who had come to Kul Tiras with Jaina, to successfully escape from the prison island of Tol Dagor during the night. Taelia waited for Flynn and the emissary outside the prison and paddled with Flynn to reach the city of Boralus by dawn.[4] At the end of The Pride of Kul Tiras storyline, Taelia is introduced to King Anduin Wrynn, who explains that he knew her father and invites her to visit Stormwind City as his guest when she has time to hear more about Bolvar.[3]

After Jaina was crowned Lord Admiral, Taelia, with a new hammer and new armor, became a member of a five-man patrol squad implied to be part of a larger company,[9] alongside Carter Riptide, Emma Swiftwind, Tamara Barrie, and Edward Nash, with Galeheart accompanying her.[10] The squad discovered the Horde attacking Anglepoint Wharf and when they saw the enemy had Azerite explosives, realized they meant to destroy the seawall there. They joined the Outriggers in fighting the Horde but were eventually overwhelmed. As Galeheart was the fastest gryphon, Taelia was dispatched to warn Jaina, and she reluctantly left while the rest of the squad covered her escape.

Taelia returned to Anglepoint with the Alliance emissary and Jaina, who reassured her that going for help was the right choice after Taelia apprised her of the situation.[9] Accompanying Jaina to clear the south shore as it was her duty to stay with the Lord Admiral, Taelia asked the adventurer to find her squad while clearing the north shore.[10] She would later witness the adventurer assist Jaina in destroying the Horde's attacking ships.[11]

Please add any available information to this section.
Taelia was with Jaina in Boralus when the Mawsworn captured her. Afterward, Taelia traveled to Stormwind City. In a conversation with Genn Greymane, Mathias Shaw, and others, she learned that her father Bolvar was not only still alive, but he had actually been the Lich King for the last several years; she expressed great anger that Anduin had not told her. But as the Helm of Domination had recently been shattered, Bolvar was now free of that role. Taelia swore to stand by his side.

Taelia later traveled alongside Calia Menethil to Oribos within the Shadowlands, the afterlife, to meet up with her father. She asked him to look into the Maw to see if their captured friends were still alive, and when Bolvar at first denied her for fear of what coming into contact with the Maw would do to him, Taelia's heartbroken second request convinced him.[12]

Jaina must have had her reasons... right?

By the time I entered the guard I was already better trained than some of my instructors.
They didn't appreciate that.

That sounds incredible! I'd love to see it some day.

When something goes wrong, old sailors will shrug it off and proclaim: "You cannot change the winds."
I hate that saying.

And tales of its fall.
The Scourge took my mother, my father, and my homeland before I was even old enough to understand.

We'll get through this together.

Not everyone in my patrol squad made it, but many did. That's something to hold on to, isn't it?

Thank you for saving the lives you could.

The Shadowlands. It's remarkable... and if I'm being honest, a bit terrifying.

But I will not let fear stop me from helping my friends.

Or from getting to know the father I thought was lost to me.

<Stay awhile and listen.>
Jaina walks over to Taelia and Calia.
Taelia Fordragon says: I'm so relieved you're safe, Lord Admiral. I can't imagine the horrors you and the others endured.
Lady Jaina Proudmoore says: Thank you, Taelia. The Maw is... bereft of hope. I've only experienced such emptiness once before. When I faced Arthas in Icecrown.
Calia Menethil says: The specter of my brother hangs over all of us like a shroud. His choices were his own, though it does seem his fate was shaped in part by the hand of the Jailer.
Taelia Fordragon says: My father's fate as well. The helm... that blade... were they instruments of the Jailer all along?
Lady Jaina Proudmoore says: The runes on Frostmourne were a type of magic not seen on Azeroth before the Lich King. But that same power is woven into the very fabric of the Maw... and Torghast.
Calia Menethil says: Arthas and Bolvar were not the only ones touched by that dark influence. The blade claimed many lives. Many souls.
Lady Jaina Proudmoore says: We cannot allow it to claim Anduin as well.
Jaina returns to her old position.

Taelia's mother could be Lady Mara Fordragon, who fled to Lordaeron and has been presumed dead since, which would match Taelia's account of losing her mother when the Scourge hit Lordaeron.