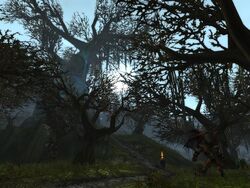 The Tainted Forest is an expanse of the revitalized area in the Tainted Scar, created thanks to the efforts of a worgen druid named Marl Wormthorn. However, the area wasn't cleansed from the demon presence and soon after the regrowth of the forest was finished, it became corrupted and Wormthorn with it. Now he resides in the great tree Maldraz, surrounded by demons and continuing to grow the corrupted forest. Both the worgen of Surwich and blood elves of Sunveil Excursion want Wormthorn dead.

Fungal giants have also started to appear from a small pool beginning to form large mushrooms.