Talador is the heart of Draenor. It rests at the crossroads of the continent, divided by rivers that flow from the Sea of Zangar and enable marine trade and movement from east to west. At the center of Talador shines the glorious cathedral city of Shattrath: a museum metropolis, an architectural marvel, a preserved recreation of ancient draenei culture—entirely occupied by the Iron Horde.[1]

"When I remember our beautiful city with its glimmering spires, my heart aches."
—Vindicator Maraad[2]

Talador is the sanctuary of the draenei people. At its heart rests Shattrath City, the great metropolis, and the spiritual well of Auchindoun, where the souls of departed draenei reside. Bathed in a perpetual autumn hue, its beautiful olemba forests, gardens and settlements are at risk of decimation by the Iron Horde and the Burning Legion.[3]

After coming out of a major confrontation against the Iron Horde in Gorgrond and leaving one of their bases in ruin, you and your forces have begun erecting an outpost just north of the draenei city of Tuurem in a bid to push back the invading fleet. Under the command of the ruthless Warlord Blackhand the Destroyer, the Iron Horde has already made landfall on the Orunai Coast and have taken most of northern Talador—including the sprawling city of Shattrath, the trade capital for all of draenei civilization. If they aren't stopped soon, all of Talador will fall into Grommash Hellscream's grip, and the rest of Draenor is sure to follow. Talador's strategic location at the heart of Draenor would give the Iron Horde the perfect launching point for their amassing forces in Tanaan Jungle. Pushing the Iron Horde back will be no simple feat, however. They have greater numbers, a stronger foothold, and one of the most brilliant military generals to ever live backing its mission. A confrontation of epic proportions between Warlord Blackhand and Orgrim Doomhammer within Shattrath will shake the city’s foundations, and not every hero who enters may make it out alive.

Even once the Iron Horde is routed out of Shattrath, the city will not remain safe for long, as new foes are waiting to emerge and lay claim to the city. The Sargerei are a sect of draenei who have aligned themselves with the Shadow Council to usher Gul'dan's twisted schemes into fruition. With most draenei cities razed and sacked by the Iron Horde, allies are few and far between - but they do exist. Pockets of draenei resistance dot Talador's forests, eager to retake their homes and enact vengeance on their assailants. In an ancient caldera to the east at a major ley line nexus, Archmage Khadgar and the Kirin Tor have taken up residence. Perhaps most curiously, there have been several sightings near the city of Aruuna of arakkoa outcasts — flightless bird-men powerful in the ways of shadow magic. Some say their existence is little more than a legend, but players will have to find out for themselves if the rumors are true — and if they are, what brings the arakkoa outside of their ancestral home in Spires of Arak... or, more importantly, who.

On top of all of the very real threats players face in their first foray into Talador, a darker, more sinister threat lurks to the south. Teron'gor, right hand of Gul'dan, leads a massive assault on the holy mausoleum of Auchindoun, resting place for all draenei souls. Demons pour in at the Burning Front from the remains of a ruined world somewhere in the Twisting Nether. The Shadow Council eyes the city of Telmor. Exarch Maladaar leads the Auchenai, ancient defenders of Auchindoun, in a desperate effort to hold off the seemingly endless waves of death. If their lines falter, Teron'gor will have unhindered access to innumerable draenei souls... and plans to consume them to gain a terrible power not meant for mortal hands. But the Auchenai have an ally that Teron'gor did not expect. Lady Liadrin and her Sunsworn felt the demonic presence and have flocked to Auchindoun's aid, and will call upon players to help turn the tide—but will they be enough?[5]

The zone has a palette of oranges, golds, and greens that make it incredibly vibrant. Talador is home to the heart of draenei civilization: the sprawling trade hub of Shattrath, the massive mausoleum that is Auchindoun, the iconic city of Tuurem, the mythical Telmor, and so many others. Many creatures that call this great forest home have adapted unique hunting techniques to survive. The devious stalker is able to change its skin coloration to camouflage it, allowing it to ambush prey or escape predators unseen. Mighty teroclaws, flying beasts that use their strong beaks to sever both flesh and bone, rule the skies here rather than the rylaks found in many of Draenor's other locales. Moths are drawn to the plentiful water sources, and have developed the ability to channel the abundant magic energy in the air around them into condensed blasts. Those same water sources are home to all sorts of electric eels, poison frogs, and even mighty riverbeasts. Some caves are home to ferocious territorial spiders that few dare disturb — their venom is said to be able to alter both the body and mind. Tigers prowl the lower mountain ridges, hungry for their next kill.[5]

Many olemba trees can be found in the region.

Chapter 2: The Plight of the Arakkoa

After Kairyx was slain, Raksi asked the champion to investigate the alleged artifact. When the champion found the prism, Raksi revealed herself to actually be Shadow-Sage Iskar and knocked the champion out. The champion came to in Terokkar Refuge surrounded by arakkoa. Iskar apologizes for his deception, but claims it was necessary to ensure the champion would fight against Kairyx. Iskar explains that he and the others of the village--the Arakkoa Outcasts--are arakkoa who are unable to fly and were cast down by the leading faction of arakkoa: the Adherents of Rukhmar. In addition to burning Aruuna for its alleged artifact, the Adherents are also destroying the nearby Outcast village of Veil Shadar. Iskar and the others ask the champion to push back the Adherent advance and kill their commander Wing-Guard Kuuan. After the champion does so, the Outcasts make it clear they have greater designs for revenge against the Adherents.

As they are returning to Fort Wrynn, the champion sees that Barum and his daughter Melani escaped safely to Anchorite's Sojourn.

After returning from Xandros, the champions found Gul'dan and Teron'gor gone and a trail of corpses leading to the entrance to Auchindoun. Soulbinder Tuulani and the Auchenai regrouped with the champions and pressed into Auchindoun to look for them. After finding the gates mysteriously sealed, Tuulani disabled the locks and the champions proceeded to the Western Transept where Soulbinder Nyami revealed that she was in league with Gul'dan and was behind the warlocks' plans in Auchindoun.

Nyami ordered Vigilant Kaathar, a vigilant which still trusted her, to attack and kill the champions. After Kaathar was defeated, the champions found that there were many draenei that were following Nyami under Gul'dan's orders and fought through waves of draenei vindicators to confront Nyami herself near Auchindoun's entrance. Nyami was defeated, but ominously told the champions that they were too late as the Burning Legion had already arrived.

After defeating a small army of demons, the champions confronted and defeated a harbinger of the Legion, the overfiend Azzakel in the Eastern Transept. With the Legion's advance force routed, the champions defeated the warlocks protecting Teron'gor in the Congregation of Souls and then confronted Teron'gor directly. In defeat, Teron'gor attempted to consume even more souls to prevent his death and seemed to become overcome with the power of Auchindoun and fell off the edge of the platform, disappearing.

Continuing the tradition started on the Timeless Isle, Talador has a huge number of vignettes, which are one-time events like killing rare mobs, looting treasure chests, or completing scripted events. Nearly all of the vignettes reward 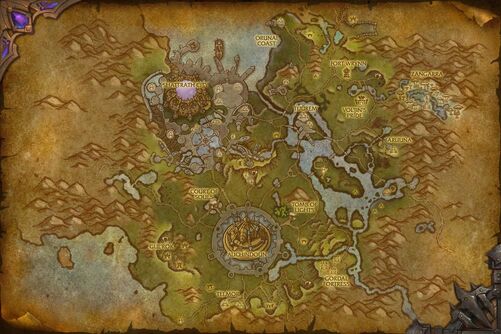 
A rare lily grows in the waters of Talador. Alchemists say it is many times more efficient than