Not to be confused with Vagath.

Talgath was a high ranking leader of the Burning Legion, close to Kil'jaeden in rank.[2] Talgath's role was to help Kil'jaeden corrupt the native populaces of different worlds. He brought down countless civilizations, and he knew how to tempt mortal hearts. Sometimes he found heroic champions who could be turned, but very often he found willing minds among those who live on a world's fringes.[3] Talgath was an opponent the Army of the Light encountered on numerous occasions.[4]

Talgath leading the demonic eredar during the flight from Argus. 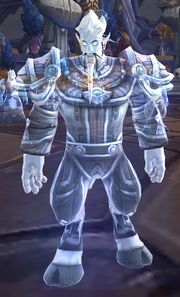 Talgath was an old friend of Velen on Argus, and one of the Council to the Triumvirate. He was among eredar who gathered in Mac'Aree when Kil'jaeden told them about Sargeras. During this he watched Archimonde and Velen who were off to the side, only occasionally glancing at Kil'jaeden.[5] Velen entrusted Talgath to gather eredar who were wary of Sargeras and his tantalizing offer. Among the eredar he was to gather, Velen specifically asked Talgath to bring Velen's family. Unfortunately, Talgath was himself seduced by those very promises and betrayed Velen and his cohorts to Kil'jaeden.[6] Hatuun, another one of the Council to the Triumvirate, fought Talgath off when he came after Velen.[7] In spite of this, the naaru managed to spirit Velen and the draenei away, bringing the Deceiver's wrath upon Talgath.[8]

But Kil'jaeden was merciful and placed Talgath in charge of finding the draenei. For a long time, Talgath remained unsuccessful in his search — he found countless worlds that had been touched by the draenei, but they had always escaped before the Burning Legion arrived. He eventually succeeded and located them on Draenor,[9] and Kil'jaeden ordered Talgath to spy on the new world. He completed the task and discovered a race called orcs. Following this, Kil'jaeden assumed full command of the operation and Talgath was reassigned. 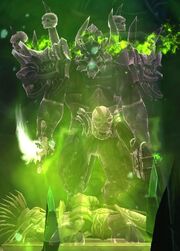 An image of Talgath in Azsuna.

Talgath stumbled upon an effective method of corruption: find the selfish, the greedy, and the ruthless, and make them compete for power. Not only would he learn which among them were the strongest, but the "winners" would struggle so hard to obtain their prize that they would be unwilling to question its true cost until it was too late. Azeroth's pirates must have immediately seemed vulnerable to this tactic. They raided one another in search of treasure, giving little thought to the risks they would undertake. The choice to create a pair of nimble cutlasses, the sort of weapons favored on the high seas, meant Talgath saw great potential in corrupting pirates to the Burning Legion's cause.

The weapons first showed up on Azeroth a few decades ago. Several Alliance ships reported that they had escaped a band of pirates whose leader carried glowing blades oozing black smoke, and soon it became clear that those ships were the lucky ones. A newly empowered crew of pirates was preying on Alliance vessels, and when the raiders captured a ship, they left no survivors. Grand Admiral Daelin Proudmoore led the search for the rogues, and after weeks of hunting, his small fleet cornered their ship a few miles off the Eastern Kingdoms' shores. The pirate crew seemed to be possessed, barely human, but after a coordinated cannon barrage, Proudmoore sent their vessel, the Bellwether, to the bottom of the ocean. The admiral sailed away, believing he had killed them all. In truth, one had survived. The single person who swam away from the sunken Bellwether was a teenage boy, a young pirate recruit who had seen his crew descend into corruption and madness firsthand. He took the weapons and the treasure back to his crew's old lair and buried them deep underneath an isolated island. He believed the riches were cursed, and so he left them behind. The weapons would remain buried for years.

It took the upheaval of the Cataclysm to unearth the cutlasses again. A ship carrying some Bloodsail Buccaneers, a small but dangerous pirate crew, took shelter near a patch of tiny islands as the seas heaved to and fro. After the initial elemental unrest passed, their leader, Admiral Eliza Goreblade, noticed that rogue waves had revealed something beneath the sand. When they looked closer, they found a cache of gold, jewels, and old weapons. It was the last stash of the Bellwether, a windfall nobody knew had been missing. The buccaneers gleefully took it all. Admiral Goreblade reserved a pair of gleaming cutlasses for herself, the only weapons in the cache that hadn't become rusted and worn over time. Unfortunately, that decision led her crew to ruin.

Shortly before the Burning Legion's third invasion, Admiral Goreblade finally discovered the true power behind her weapons. Talgath revealed himself and told her that she had only tasted a meaningless drop of the Burning Legion's strength. If she aided the demons in the coming war, he promised that she would ascend to immortality and find out what might the Legion could truly bestow. The admiral agreed immediately. She made a pact, giving the souls of all her crew to Talgath's tender care.

Goreblade's buccaneers became an unseen, deadly menace on the South Seas. Talgath had seen what attracting too much attention would do, so he encouraged Admiral Goreblade to attack only isolated ships and make certain they did not escape. For several years, the pirate crew did exactly what they were told. They killed without mercy, and the power of the cutlasses grew ever stronger. When other Bloodsail Buccaneers learned how deep into insanity this crew had fallen, they tried to intervene. Goreblade's pirates survived the counterattack and managed to steal the Bloodsail Buccaneers' most prized ship, the Crimson Veil, for themselves. Soon, some crew members began to change. Their forms withered and faded, and only their skeletons remained.[3]

An image of Talgath appears commanding Eliza to kill a rogue adventurer seeking the Dreadblades.[10]

Talgath was defeated through means unknown and his spirit was sent back into the Twisting Nether.[3]

Talgath regenerated after being sent to the Nether. He outlived his master Kil'jaeden, who had died to the forces of Azeroth within the Twisting Nether, ending his life for good. When Velen traveled to the ruins of Mac'Aree on Argus seeking the Crown of the Triumvirate, Talgath's Talgathi forces arrived to stop him from retrieving the Crest of Knowledge, Kil'jaeden's piece of the crown.[11] Talgath himself appeared at Kil'jaeden's Terrace, the very place where he first heard of Sargeras. He commented on how unlike Velen it is for the Prophet to stand his ground, but that it was a welcome change of pace. Velen attempted to reach a peaceful solution and told Talgath to stand down, but Talgath refused.[1]

During the battle, Talgath taunted Velen, telling him how his departure wounded Kil'jaeden and how cold Velen had been leaving his wife and son behind. When Talgath was about to lose he attempted to flee, but Velen bound him with chains of light. Velen once more tried to get Talgath to help them find the Crest of Knowledge, but Talgath responded, in an attempt at a parting shot, that they were too late, and not even the Light could escape "the temple," unwittingly giving away the Crest's location as the Seat of the Triumvirate. Then, Velen killed his former friend with a burst of holy magic.[1]

"There is a small world, primitive and insignificant. And I have sensed their peculiar brand of magic tainting the area. It is possible that they may have come and gone. Such, alas, has happened before."[12]