Back to page
View source

Removed the Battlegrounds yet to be added, as they won't have factions with the Burning Crusade coming out. Raogrimm2

Sampendleton don't go around deleting stuff, or I'll report you to the admin to be banned. Raogrimm2

I've altered the factions so

No, I think it is better than this one ... maybe both should be merged? (with keeping the formatting of the list on the Reputations page) Kaimon33

As I made the Lore factions part I think that maybe you're right, the gods themselves may be dead but they still have many followers - the Elemental Lieutenants and the non-illidari Naga most notably. If someone else wants to remove them as lore faction too, feel free to do it. —The preceding unsigned comment was added by Dakovski (talk · contr).

Would it be possible to add a new column to the table with information for which class items are most useful? E.g. Pattern: Felstalker Bracers -> Hunter, Enhancement Shamans --James R. Cody 08:55, 29 April 2008 (UTC)

Not a bad suggestion, but not a good one for this page. That kind of thing should go in the class pages. --

I wasn't here back then, but does anyone know why Silvermoon Remnant and Theramore were removed as factions so quickly? Rolandius (talk) 13:35, 29 May 2008 (UTC)

When were the Wildhammer Dwarves added? It has a removed entry only.  Rolandius

I created an organigram of the factions. 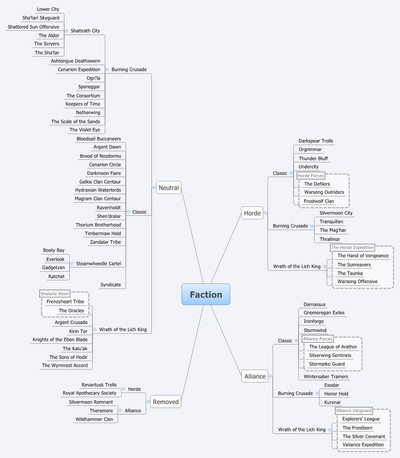 Should the 'Horde Expedition/Alliance Vanguard', 'Shattrath City' and 'Sholazar Basin' catagories be changed to sub-catagories of their relevent expansions? This would be more logical and more in keeping with the 'Reputation Factions' summary included in various other pages. Nief (talk) 16:20, February 9, 2010 (UTC)

Does anybody already know which factions will be removed in cataclysm? I have seen some videos where the magram and gelkis zentauren have no faction mark. What's about Ravenhold, Shen'dralar and such factions that have not so much meaning in vanilla? Illdvidd

I've read somewhere that Duke Hydraxis was being removed aswell, that leads me to think that the Hydraxian Waterlords faction will be no more in Cataclysm.—The preceding unsigned comment was added by Atlon (talk · contr).

It's notable that this article almost only lists factions once available in WoW. I didn't notice any deep trial to focus on the concept of what is a faction, only an small introduction that can't be considered "deep". Should this article be split in "In-game faction"/"Playable faction" (or something that would be like this) and "Faction" (that would be about the concept and faction-listing). Gabrirt (talk) 20:12, 17 January 2012 (UTC)

Well, seems we'll no longer have the main website for any additional information or as an official source for certain things that are sometimes uncertain. http://us.battle.net/wow/en/forum/topic/9628912927