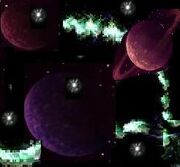 "Sometimes described as the dimension seen after death as a ghost."

According to a few refrences in WOW questlines, and in the RPG, the "Spirit Realm" you visit in game is referred to as the "Twisting Nether", or vice versa(that is the Twisting Nether is referred to the Realm of Ghosts, or Realm of Spirits). That is the in game ghost realm is apparently a reflection of a part of the twisting nether, but not the entire twisting nether.Baggins 10:27, 11 October 2006 (EDT)

Where are we in Outland?

So, as we cross the Dark Portal, what plane of existence do we enter? Twisting Nether? Land of the spirits? Doesn't this mean that nothing should change in our perception when we die in Outland? --Potbasher 08:33, 29 January 2007 (EST)

Outland is a plane. And a planet. Well, the remains of a planet. You're not in the Twisting Nether, or the spirit world, or anything like that. It's 100 % physical. The Twisting Nether is what you very briefly pass through when you go through the portal, and it's also visible in the sky from certain parts of Outland, but otherwise it is quite unreachable. Thankfully. Bad bad bad things live there, and we don't want them where we are. ----

Although this is not technical right, It's easier to think of The Twisting Nether like the wormholes in the tv show Stargate, except instead of existing only while the stargate is on, The Twisting Nether is there no matter what. --Zaning 13:23, 8 April 2007 (EDT)

Actually Varghedin, it is partially within the Twisting Nether. Outland is the result of the Twisting Nether bleeding into a physical realm. The explanations of how such a diverse ecosystem can even exist with the complete absence of atmosphere, or even gravity without any planet core to speak of, is because of the mysterious nature of the Twisting Nether keeping it all together. Netherstorm is one example in particular where the lines between the two dimensions blur considerably.

And, this is speculation on my part, it is also the reason why fel reavers and infernals are able to be constructed in Outland as opposed to Azeroth.--Zexx 14:56, 31 January 2007 (EST)

I added a section about how when you go east of Tempest Keep you enter a region called "Twisting Nether", as I discovered last night when exploring the region around the Keep. About the only thing I found out about it was that when you open the map while in it, it defaults to the all-Outland view, similar to how the map opens to an all-continent view when going too far out to sea.

Yeah I've noticed that myself, and some time ago I adjusted the text of the article to reflect it. But thanks for your comments.--Scrotch 00:37, 17 June 2007 (UTC)

Interesting fact: If you fly south (maybe southeast, not sure, just look around that area; I originally found it when flying northeast from Shattrath to Tempest Keep) of Tempest Keep into the Twisting Nether, you should find a ship. It has nothing inside, it's just a ship on a floating rock. I will take and upload a screenshot later. - Magnett 00:07, 23 March 2008 (UTC)

Titans in the Nether

It says under races and creatures that aesir and vanir titans live in the nether. is this true? I always thought they lived in the great Dark.

Oh where does it say that? I only see the part where it says, "it is believed that they live among the stars". That would be the great Dark.  Rolandius

It says it under the heading, "Races and creatures" They're at the end of the list.

I still don't see where it says they live in the nether.  Rolandius

"The Twisting Nether is timeless. Age, hunger, thirst, poison, and natural healing do not function in the Twisting Nether, though they resume functioning when the traveler leaves the plane. It is also strongly chaos-aligned. It also enhances magic. Magic is extremely powerful in the Nether. Any spell cast while in the Nether has its duration extended. Illusion spells cost no mana and last for extended periods."

The first claim made is that the Twisting Nether is completely timeless. Effects incurred by the passage of time . . . age, hunger, thirst, poison, do not function. Because time does not pass. And yet in the description of magic, the second claim suggests that durations of spells are greatly enhanced.

Well, how can that be, if there is no true passage of time to speak of? A spell that does not have immediate and obvious effects should do nothing at all. I'm not against magic enhancing things in general -- it might very well enhance the POWER of a spell by 1000% -- but completely contradicting the very specific established laws of physics of this place? Color me confused. --P.W (talk) 09:21, September 14, 2009 (UTC)

Consider also that for it to be timeless, we would not be able to enter it (movement = change in location over time). Yet, clearly, we enter some region labeled "Twisting Nether" should we fly between Hellfire Peninsula and Netherstorm. This is irreconcilable if we use the definition you quoted, P.W. A definition of "this place does not itself change" is still sustainable, though. --Eirik Ratcatcher (talk) 17:31, September 16, 2009 (UTC)

Actually, its worse than that - "Any spell cast while..." directly implies dynamics and therefore time - if there was no time, then there's no meaningful way to transition between "Not casting", "Casting" and "casted". The same problem is caused by "When the traveler leaves". I think the only way to resolve this is that the definition of "timeless" is looser than we are taking it to be, although how that'd work?... I deleted the sentence "The twisting nether is timeless" because frankly these paradoxes are just annoying--16:49, 15 April 2014 (UTC)Oheath 9 (talk) 16:49, 15 April 2014 (UTC)

Nethers of the Multiverse

Each universe has its own Nether. The Legion/demons are from the Nether and have separate counterparts in the different universes. If there was only one Nether, they'd all be interacting with their infinite counterparts and the stuff we do in WoD would screw up our history, which it doesn't. Plus, Kosak said:

Okay! So do we create Twisting Nether (Warlords of Draenor) for WoD's events since the void creatures came from its own nether and not this one?--Mordecay (talk) 21:27, 18 December 2014 (UTC)

Maybe a note saying that they are not the same instance of the nether. If there is no difference besides there being two of them and no plot divergences, then it does not need a page.--SWM2448 21:37, 18 December 2014 (UTC)

I don't know if there are those who says the Titans reside in the nether, that claim was present on this page before I edited it. I'll be looking for sources though. =]

Doesn't seem like they would since their first contact with demons was when they came out of the Nether to attack titan worlds. If the titans resided in the Nether, they would have encountered demons beforehand. And with the revelation that there is a single Nether across realities, Muffinus' tweet that the titans are not singular, this would discount them residing there.

Realm of the Dead

So....Micky's reasoning why Balnazzar was able to possess human paladins is because he existed in-between the realm of the living and the dead...but what about Kathra'Natir? He possesses Meryl and was in the Twisting Nether sucking magic from people for a time. So let me get this straight...A demon can exist in the Nether AND in between the realm of the living and the dead? Should I note this on the page?VisionOfPerfection (talk) 16:21, 19 September 2015 (UTC)VisionOfPerfection

"Realm of existence", not "dimension"

Please, for the love of science, stop misusing the word "dimension", except when referring to in-game terms, such as Dimensional ship or Dimensional gate. Dimensions are tools for measurement, not places. The Chronicle labels The Twisting Nether, the Shadowlands etc. as "realms of existence", so there, we have that to use as an alternative. Even to say "plane" would be better, just don't use "dimension".
So now, can I go and replace the word? Goldskullb (talk) 00:46, 18 January 2020 (UTC)

This seems too rigid to me. If the Chronicle described orcs as being blue, would you state on the wiki that they are actually blue? There are three appearances of the word "dimension" on this page in which case it can easily be replaced by "realm" or "world", without undermining the intended meaning. On the Dimensional ship page, none of the appearances could be replaced, so I mentioned in parentheses, that it's incorrect. Can we agree to this?
I thought I had a habit of formulating my thoughts summarily because everybody is bored of long texts, but it must come off as bossy. Sorry. Goldskullb (talk) 01:54, 18 January 2020 (UTC)

No worries! Things can often get lost in translation, when communicating online with just text. That's just how things are, best we can do is assume good faith! :-) PeterWind (talk) 03:04, 18 January 2020 (UTC)

i'm not sure this is comparable to a hypothetical "orcs are blue" situation. the color of orcs is easily observable, so if a source claimed they were blue, it would obviously be in contradiction with all other sources. blizzard's definition of "dimension" (and whether said definition applies to the nether) is not easily observable, so in order to say that chronicle is wrong, we'd need other sources that explicitly contradict it.
also, i don't think "world" would be a good replacement, since it's almost always used to describe planets (e.g. world-soul, "all worlds shall burn," etc.) —Eithris (talk) 04:45, 18 January 2020 (UTC)

Blizzard are the ones who decide the rules for this fictional universe, not us. If they say that the Twisting Nether is a dimension, then it is a dimension. --

Blizzard gave us a choice: either call the Twisting Nether a “realm of existence”, as labelled by the title of the page in Chronicle, or call it a “dimension”, as they did several times. Yes, the frequency of the word “dimension” should constitute a strong argument, but why not do better, where possible? The first is a broad term, but is used correctly. The second one is hard to grasp and is used very incorrectly. The pedia itself has a page titled “Plane”, and searching for “dimension” directs towards it, not the other way around. “Plane” is geometrically incorrect, but still has the meaning of a place as well, instead of just a set of properties of space.
Scientists have feelings too. And those feelings get hurt when people show ignorance towards their domains and even more so when that ignorance is willfully perpetuated. (For the matter, I’ve simply graduated a science university.)
And another thing: it’s obvious I should wait some time before replying to a contradictory argument, to refine my thoughts and leave bad feelings out of them. But maybe you guys should wait too, before discouraging other people’s ideas. Goldskullb (talk) 14:48, 18 January 2020 (UTC)

The wiki's purpose isn't to do better than Blizzard. The wiki's purpose is to reflect the canon lore and what Blizzard have said about a subject; that's the information that people come to the site for (I have to imagine, anyway). If people with expertise in real-world subjects get upset by Blizzard's misuse of certain terms, I'd say that that's on Blizzard, not the wiki that simply reflects Blizzard's products. We can add a note about when a term they use is incorrect compared to the formal meaning, like on Tol Barad Peninsula, (although I don't think it'd be necessary in this case since this usage of "dimension" is found all over pop culture and is far from unique to Warcraft) but we shouldn't remove correctly cited canon information just to try and align things with real-world science. --