Talon King Ikiss (pronounced Eye-kiss), the level 69 boss of Sethekk Halls in Auchindoun, is one of the leaders of the Sethekk, along with Darkweaver Syth.

Together, they led the exodus of the Sethekk from Skettis to the ruins of Auchindoun. Although a charismatic leader at the beginning, Ikiss has since descended into madness.[1]

He now openly proclaims that he is Terokk reborn and expects the arakkoa to bow down to him as their ruler.

Ikiss was once a respected sage of the Adherents of Rukhmar, but he began to research the truth behind Terokk's downfall, which had been covered up by the Adherents. One day Ikiss sought out the Outcast sage Reshad to receive a scroll from him, one detailing the true history of Terokk and the arakkoa and not the lies from the Adherents, but he was found by Adherent soldiers and captured. Before he was taken, Ikiss ranted and raved to an arakkoa named Viryx that it was all a lie.[2]

Ikiss was banished by the Adherents and thrown into the pools at the Sethekk Hollow, mutating him and transforming him into a broken, flightless arakkoa. After his fall, Ikiss became completely obsessed with Terokk and thought himself to be Terokk's reincarnation. For a time he and his followers worshiped Sethe, whose power was able to dominate the raven god Anzu, but eventually they turned to the Summoned Old God.

Some years later, Ikiss and the Sethekk misinterpreted the destruction of Auchindoun caused by Murmur's summoning as the arrival of their Old God master on the planet. Taking his followers, Ikiss led them to a wing of Auchindoun that they named the Sethekk Halls.

Talon King Ikiss was the charismatic spiritual leader of the daring group of arakkoa which left their home in the Terokkar forest in search of a "promised god." He had received dreams of this god as he slept and knew that revelation lay within the crumbling halls of Auchindoun. Ikiss was driven insane by the visions and now declares himself to be Terokk reborn a divine hero from arakkoa myth. 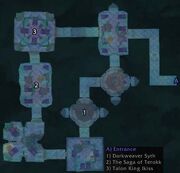 Ikiss has low armor and his melee attacks are fairly weak and can generally be healed through without any difficulty. He has three abilities that make the fight more than a typical Tank and Spank:

In a typical battle, your tank will run in and aggro Ikiss, pulling him next to a pillar. Ranged DPS and healers should position themselves near other pillars. Ikiss will soon cast his initial Arcane Bolt volley. Once sufficient threat has been established by the tank, DPS can begin. If possible, dispel polymorphs quickly. Watch for his blink and the AoE animation; as soon as this is seen, all characters must quickly run around a pillar near them, to a location where line of sight on Ikiss is broken. After the very noticeable blast, the tank should immediately move to re-establish aggro if another character has gained it. Another volley and polymorph will soon follow. Repeat until Ikiss is dead.

Melee classes seem to be most prone to dying in this strategy, as they usually have the farthest to run when Ikiss begins his AoE; if your party includes several (or is otherwise unable to survive long enough to kill Ikiss using the above strategy) Arcane Resistance gear or Arcane Protection consumables may help.

Generally, the most difficult part of the Ikiss fight is learning to notice his AoE animation. Once everyone knows what to look for and is able to quickly move to avoid it, the fight becomes trivial. The only difficulty then comes from DPS not waiting until aggro is re-established after the blast, and pulling Ikiss off the tank and dying.

Other effective strategies include using the stairs to the entrance/exit of the instance to break line of sight, having rogues use

[Cloak of Shadows] to avoid the AoE blast entirely, and having healers equip PvP trinkets to dispel polymorph or using a

[Grounding Totem] to avoid it. The volley may only be cast when there is at least one person out of melee range of Ikiss; moving everyone close to him may stop him from casting it, but can also make detecting his blink much more difficult. On the other hand, if entire groups knows well how blink/AoE animation sequence looks like or watches his emotes closely, staying together may actually help people to react on his preparations faster, as they won't have to check where exactly Ikiss blinked this time to decide where to run, because when everyone stay together Ikiss would practically blink to same place he was standing before casting his AOE.

Picking one pillar in advance for the whole party to hide behind can be very helpful to the healer. Additionally, using a ping-pong strategy each time Ikiss uses his AOE, will make it easier for the tank to re-establish aggro. After running behind a pillar, simply wait for Ikiss to come to you after his AOE (as opposed to running back out into the middle). This strategy works especially well in Heroic mode, since Ikiss will also cast

[Slow] on the party.

Paladin Note: If your tank is an Alliance Paladin Tank, using

[Seal of Vengeance] after getting initial aggro can help getting aggro after the blinks as it does DoT Holy damage.

At all times it is possible to reset this encounter by having your party members run out of his room to the middle of the chamber before his. Arcane Volley can still hit you, but as long as the primary aggro target is out of his room, he will reset.

Many groups have trouble getting behind the pillars quickly enough. An easier method for handling the AoE, especially for melee-heavy groups, is to have the tank pull Ikiss to the hallway from which you entered and tank him right outside it, off to one side, in the room before Ikiss's chamber. When he blinks to begin his AoE, the party runs inside the hallway to either side of the doorway, and thus out of line of sight for the AoE. After the cast, Ikiss will run to the tank, and the tank moves him back to one side of the door. (Alternately, the tank can pull him to one side of the hallway, and the party run to either side of the door in the room before Ikiss's chamber. This tactic gives the party a significantly shorter distance to run to get out of Ikiss's range.

Note: The tank must be careful not to pull Ikiss too far into the other room, or it will reset the encounter.

Talon King Ikiss is somewhat more difficult now on Heroic Difficulty because he now will sheep the tank at random. When this happens, it is likely to cause a wipe because he will immediately aggro on the healer. Druid tanks are immune to his polymorph, and thus have a large advantage here. Healers could try to survive (paladin bubble, priest fade).

His damage output is about doubled on plate (1600–2000 a hit on a decently geared warrior) and all of his abilities have had their damage significantly upped. His arcane volley now hits for between 2000 and 4000 and he uses it fairly often, so it is advisable to bring arcane protection potions and/or two or three pieces of arcane resist gear to counter that. His blink/arcane explosion mechanics are the same — avoidable by line of sight, provided you have no lag problems. He is still very squishy, so concentrated damage can burn him down rather quickly.

Another problem in the fight is his arcane volley, so the healer has to be prepared to keep everyone close to topped off or they may end up dying from one of those. Healthstones and potions are invaluable in this fight at keeping people topped off, but the arcane resist makes it easier.

[Slow] on the party, which lasts for around 10 seconds; this can be devastating before the arcane explosion. If a priest is healing, it's possible for the priest to mass dispel the group, so they have just enough time to run around the pillars. This can only be pulled off if the group is in the center, and everyone is paying attention to the Raid Warnings put up.

Another technique for heroic mode

One technique that has been proven to work involves placement of the two carpets in the hall. As you first enter the hall there is a green carpet at your feet. There is another carpet to your left, between the two pillars.

If the tank can keep Ikiss in the center until the blink, the rest of the party should stay on the carpet. Immediately following the blink, the tank should run directly to the other carpet, and the other four should run around the pillar to that same carpet. Do not heal or cast until the tank picks up aggro again. Repeat this procedure, alternating carpets.