Talonpriests are arakkoa followers of Terokk that wield dark powers of the Void.[1] They use elixirs to shift into a realm of shadow.

[Shadow Dust] bears a special connection to the realm of shadows and is a critical reagent in the sacred rites of the talonpriests.[2]

When the Anhari priesthood (later called the Adherents of Rukhmar) betrayed Terokk and cast him into the cursed pools of Sethekk Hollow, the Raven God Anzu saved the king and granted him and his followers the secrets of sorcery and shadow magic, giving rise to powerful Outcasts known as talonpriests. Together with their king, they would eventually build the refuge city of Skettis to protect the unwanted children of Rukhmar. Over time, the Curse of Sethe tore at Terokk's mind and brought him to the brink of insanity, and he resorted to increasingly desperate and brutal methods in his search for a cure. When he began sacrificing his own followers, the talonpriests, hoping to rejuvenate their fading king, sorrowfuly sealed him away in the realm of shadows where Anzu had once hidden.[3][4][5] Whenever new dissenters and heretics were cast out and cursed into Outcasts, the talonpriests welcomed them into their society. Slowly, the Outcasts grew in number, until their population rivaled that of the high arakkoa.[5]

Believing they have been abandoned by the sun, cursed arakkoa prefer to hide in the forests or beneath awnings during daylight hours. Talonpriests take this a step further and never show their faces to the sun, wearing ritual masks that act as a focus for their communes with Anzu.[6]

On the alternate Draenor, Talonpriests live among the Arakkoa Outcasts in secret, guarding the rites of the Talon King's return.[7]

The remaining talonpriests allied with the Outcasts and summoned the Shade of Terokk into the world. Talonpriest Ishaal then joined the Alliance or Horde as a follower. 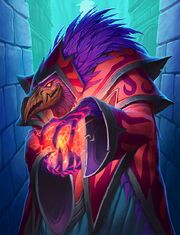 A talonpriest loyal to the Kabal in Hearthstone.