Taoshi is a high-ranking member of the Shado-Pan. She is described by their leader Taran Zhu as "my best", and is often seen in the position of Taran's right-hand man.

She is at the front lines of battle when the mantid attempt to invade Townlong Steppes, directing Shado-Pan scouts and combating the mantid directly. She, along with the adventurer, fight back Norvakess, Terror of the Dread Wastes. Following this she accompanies Taran Zhu in his mission to defeat the Sha of Hatred, leaving only briefly to take care of a Shado-Pan camp taken over by sha-infected scorpions.

She next leaves on Taran Zhu's orders, to seek out the Sha's hiding place. After her successful report, she, Hawkmaster Nurong, and Lao-Chin the Iron Belly break into Sik'vess Lair. Together with Taran Zhu, they defeat the Sha of Hatred.

After the Sha's defeat, she and several other high-ranking Shado-Pan stay at Shado-Pan Garrison. While there she fights against the mantid at Sra'vess.

When the threat of Lei-Shen, the Thunder King, reappears, Taoshi goes with Shado-Pan forces to the Isle of Thunder to stop him. Though the Shado-Pan remain neutral while the Horde and Alliance are at odds, Taoshi notes all three factions share a mutual goal to take down the Thunder King. As such, she works with both factions to accomplish taking the island out of the Thunder King's hands. With Alliance/Horde help, she wins them Lightning Vein Mine.[1]

Soon after, Taoshi forms a plan to take the palace shipyard, which Taran Zhu declares too dangerous. She goes to the two other factions, and with their support convinces Taran Zhu to give his approval. The plan -- involving Taoshi sneaking onboard a ship and defeating its crew, then unlocking the door to the shipyard from within -- goes off without a hitch, giving the Shado-Pan, Alliance, and Horde another step forward in taking the island.

Taoshi can be found on the Timeless Isle overlooking the Celestial Court with Hawkmaster Nurong.

Taoshi visits the Garrison's tavern in order to obtain a sample of the winds from Skyreach.

Now one of The Uncrowned, Taoshi is within the sewers of Dalaran in the secret Hall of Shadows.

When a monk adventurer goes after

[Sheilun, Staff of the Mists] at the Terrace of Endless Spring, Taoshi is among the Shado-pan who aid them in the battle against the Burning Legion.

When the Uncrowned learns that Mathias Shaw has been replaced by Detheroc,[3] Taoshi decides to find and save the real Shaw in order to expose the dreadlord.[4] She and a fellow Shadow of the Uncrowned infiltrated Felsoul Hold, with bombs provided by Marin Noggenfogger serving as cover. They found and located Mathias Shaw, returning him to the Hall of Shadows.[5][6] After being saved, Shaw revealed to the Uncrowned that Detheroc had told lies to Anduin Wrynn about the Horde and had manipulated the new king into preparing Stormwind's armies to attack the Horde, thus beginning another conflict between the Alliance and Horde when the world could least afford it. To cover his tracks, Detheroc had put up wanted posters of the members of the Uncrowned all over Stormwind, claiming they had conspired with the Burning Legion, and thus turned Stormwind's citizens and guards against them. An adventurer, Taoshi, and Shaw were brought to Stormwind under the cover of night by Fleet Admiral Tethys and sneaked their way to SI:7 headquarters, where they exposed Detheroc and defeated him.[7][8]

During that time, Taoshi and the Shadow were wanted dead for conspiracy with the Legion.[9]

Taoshi appeared in the Vale of Eternal Blossoms when it is assaulted by the Black Empire, fighting with Taran Zhu. Her focus was against the Deephive mantid, where she ordered their deaths.[10] She also instructed adventurers with destroying corrupted incubators, that contained mantid eggs that if allowed to spawn would hatch a new swarm empowered by N'Zoth.[11]

From Mistfall Village, she directed adventurers against the mantid swarms and the invading mogu clans. She seemed to be aided in this by Chen and Li Li Stormstout.

[Ooze-covered Amber] from adventurers, she felt that it seeped with power and corruption. Knowing that they could be faced with a threat if the rest of the mantid swarm's amber was similarly corrupted, Taoshi set off to investigate Kor'vess.[12] During the investigation, she sought to slow their amber harvesting efforts by killing a handful of them.[13] With their numbers weakened, Taoshi called on her allies to deal with the source of the corruption and acquire any corrupted amber.[14] Knowing that the kypari trees were sacred to the mantid, the fact they had allowed faceless one to corrupt them made her realize that their devotion to the Old Gods was greater.[15]

She and the adventurers were subsequently confronted by Watcher Vl'thax, causing Taoshi to remark that the mantid had earned N'Zoth's favor.[16] With the threat dealt with, they snuck into Klaxxi'vess in order to destroy the Corrupted Amber stored within.[17] Deciding that they needed to know what they were up against, they scouted out the swarm from the sky, however, they were confronted by Grand Empress Shek'zara, who ordered her swarm to show them the price for defying N'Zoth.[18] After driving the swarm off, the pair safely landed on the Serpent's Spine where Taoshi remarked that the swarm was enough of a menace on its own and that N'Zoth could transform them into something even more dire. Thus, she vowed to inform the Shado-Pan of the threat, while suggesting adventurers report to Stormspeaker Qian of the Rajani.[19]

It is discouraging that Lei Shen has found so many allies to flock to his throne so soon after his return. We should have done a better job to eliminate them during his absence.

We are ready to launch the raid at a moment's notice. All we need is the key. Have you found one?

I have the key, let's start the raid. [Queue for solo instance.] 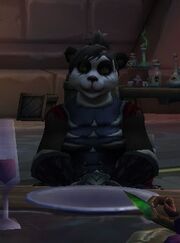 Taoshi in Hall of Shadows.

A very good day to you, <name>. I trust that the affairs of the Uncrowned are in order?

We must protect the Vale.