"Discipline: It is the only way."

Taran Zhu is the Lord of the Shado-Pan, a skilled order of pandaren monks and warriors dedicated to protect the balance of Pandaria from all threats coming from within or without the continent.[2]

He held a great mistrust of any race outside the pandaren and looked at the Alliance-Horde war as a pointless "race war" that did not need to involve his homeland. His hatred would ironically draw the Sha of Hatred to him, eventually being freed by the very adventurers he believed were the corrupt ones. From there he would join the Horde and Alliance in the campaigns against the Sha, the Thunder King, and Garrosh Hellscream. His wary nature serves as foil to the ever-trusting Lorewalker Cho.

Years earlier, Taran Zhu succeeded his father as Lord of the Shado-Pan.[1]

Once, young Yalia left her home and family in Zouchin Village as a Guided Cub and joined the Shado-Pan. Taran changed her name from Sageflower to Sagewhisper.[3]

Around the first couple of months within the Horde and Alliance's arrival to Pandaria, the young pandaren Ten, Heavy Chan and Pei-Ling completed the Trial of the Red Blossoms and Taran was said to accept them into the Shado-Pan.[4] 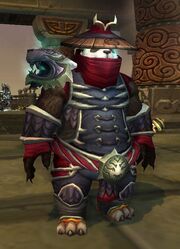 Taran Zhu is first seen at the beginning of the Jade Forest questline, where he warns both the Alliance and the Horde against the dangers of the Sha. Shortly after adventurers killed Ga'trul/Doren, Rell Nightwind/Nazgrim were surprised by the sha and Taran explained more of it as a negative emotion to all, such as doubt and hatred. He reminded them not to bring the war to the shores of Pandaria and left.

When adventurers arrived at Paw'don Village/Honeydew Village, Taran had no choice but to watch the Alliance and Horde welcomed with open arms by Sunke Khang/Mayor Honeydew, and leaves it to them to decide what to do.

During the Kun-Lai Summit storyline, Taran is seen at the Temple of the White Tiger, warning Xuen not to allow the "wanderers from beyond the mists" to enter the Vale. After Xuen finally decided to allow them to enter, Taran warned him that he was making a terrible mistake and left.

The Shado-pan became concerned with the lack of reinforcements to the battlezones they were involved in and eventually uncovered the fact that Taran had become possessed by the Sha of Hatred. He was eventually cleansed of the sha influence and led the search for the Sha of Hatred in Townlong Steppes. Zhu eventually succeeded in vanquishing the Sha of Hatred with the help of other Shado-Pan warriors and adventurers but still felt ashamed that he let his emotions get the best of him back in Kun Lai, allowing the Sha to escape.

Shadows of the Horde

While wary of the Horde-Alliance conflict, Taran did permit Chen Stormstout to bring both Tyrathan Khort and Vol'jin to the Shado-pan Monastery so they could heal. However, Taran told Chen that he would allow him to bring no more soldiers of the Horde or Alliance to the temple and unbalance things. At the same time in order to achieve he placed Vol'jin in Khort's care, which Vol'jin and Khort expect was done so that Lord Zhu could see their interactions and judge for himself the relationship between the Horde and Alliance, without the bias of the other side. Meanwhile, Taran allowed Vol'jin to undergo monk training and offered advice while Vol'jin and Khort struggled with their identities.

After Vol'jin received a vision of the Zandalari attacking Zouchin Village, Taran ordered a small force of his Shado-pan monks to aid them in protecting the village. He later would instruct a small force of Shado-pan along with Vol'jin, Khort, and Chen to enter the Vale of Eternal Blossoms in order to stop the Zandalari from resurrecting Warlord Kao, a general of the Thunder King. However, Vol'jin and the others would fail and Warlord Kao would be resurrected and the survivors taken prisoner on the Isle of Thunder. However, Vol'jin and his allies would later escape their prison and make their way towards the Shado-pan Monastery.

Anticipating an assault by the Zandalari, Zhu gathered all the forces he could spare to defend the Shado-Pan Monastery: a mere twenty-nine monks, with the addition of Lord Zhu himself and his three non-Shado-Pan guests, Vol'jin, Chen, and Tyrathan. With numerous traps and skilled fighting, the Thirty-three held off the attackers in the Temple of the White Tiger, but not without suffering heavy casualties. After Vol'jin had deeply unnerved the surviving Zandalari forces, Zhu bid them to leave and allowed them to take their wounded.[3]

Taran Zhu is seen in the cave just outside of Throne of Thunder along with Taoshi, Yalia Sagewhisper, Lao-Chin the Iron Belly and Hawkmaster Nurong. He gives adventurers a group quest of dealing with the Thunder Kings champions. He also keeps a close watch on Lor'themar Theron and Jaina Proudmoore in the upcoming time when they assault the gates of Throne of Thunder.

To stop one of Lei Shen's most powerful mogu minions, Shan Bu, from bringing the gatekeeper Nalak, the Storm Lord back into the world, Lord Zhu and the Shado-Pan have launched a raid on the outer courtyard to stop Shan Bu. After fighting through Shan Bu's mogu and Zandalari army, Zhu taunted Shan Bu into dueling him. Growing weary, Shan Bu grabbed Zhu by the throat and attempted to kill him by strangling him. However, before he could do so, Bu was struck down by an adventurer. After Bu's death, despite being gravely wounded, Zhu intervened to stop Lor'themar and Jaina from attacking each other, demanding that they act now to end the cycle of violence between their factions. The two leaders were eventually convinced by Zhu to lower their weapons and walk away, leaving without bloodshed and returning to their bases. Yalia then took Zhu to safety.[5]

Under Warchief Hellscream's orders, a Horde excavation force laid waste to sacred ground in the Vale of Eternal Blossoms, in an attempt to unearth yet more dangerous artifacts of use to Garrosh's cause. In retaliation, Zhu confronted Dezco at the Shrine of Two Moons, and ordered him to leave the vale, threatening to use lethal force should the Horde not comply. Dezco was able to stall Zhu's wrath, informing him that the man responsible for this travesty no longer spoke for the rest of the Horde and that indeed, many are now rising up against him. Dezco promised to bring Hellscream to justice, asking only time to make it happen.

No stranger to dealing with tyrants, Zhu warily allowed Dezco the chance to make things right, giving the Dawnchaser chieftain until the end of the season to make good on his promise.[6]

After Garrosh Hellscream discovers and brings the Heart of Y'Shaarj to the surface of the Vale of Eternal Blossoms, Zhu confronts him in an attempt to stop him from using the Heart to corrupt the Vale. However, not even Taran Zhu could defeat Garrosh and was wounded on Garrosh's axe, Gorehowl. Garrosh let him see the Vale become a Sha-infested wasteland.

After Hellscream is defeated, Zhu heads off a building argument between Thrall and Varian about summarily executing him. He points out that Garrosh's crimes have affected many people, "most of all" the Pandaren, and therefore arrests him for trial in Pandaria.

Taran also participates in the Celestial Tournament with his companions - Bolo, Li, Yen.

In the Temple of the White Tiger Zhu was the judge, fa'shua, of Garrosh Hellscream's trial by the tradition of ancient Pandaren law. Working with Baine Bloodhoof and Tyrande Whisperwind as Chu'shao, defender and accuser, and with the August Celestials as the jury, he let the court throughout the whole process. Before the official start, he gathered Kairozdormu, Chromie and the chu'shao in order to explain them the artifact

[Vision of Time]. At the end of the trial, he asked the Celestials to reveal their verdict.[7]

When the Burning Legion attacked the Peak of Serenity, Taran Zhu was present.[8] Afterward, the Legion invaded the Terrace of Endless Spring, and Taran led a patrol to defend it, but was injured. Soon after, a Mistweaver monk seeking

[Sheilun, Staff of the Mists] arrived at the Terrace and healed Taran. The lord of Shado-Pan then joined the monk in rescuing the patrol and obtaining the staff. According to Fei Li, Lord Taraz Zhu wasn't too pleased with her by the time of the attack on the Terrace. The reason for that was setting a fire in the Shado-Pan Monastery.[9]

Afterward, he joins the fight against the Legion attack on Tian Monastery in the Jade Forest led by the Felskorn Skola Greatsword. Working with the Grandmaster again,[10] he instructed them to kill demons,[11] destroy Fel Spike and Tainted Ale barrels, as well as to put out fel fires.[12] Once it was done, Taran and the Monkey King joined the attack on Skola in the Clarion Bell, killing him. Then he met up with High Elder Cloudfall and the rest of the survivors.[13]

He later joins forces with the Order of the Broken Temple He becomes one of the order's champions, and can be found at the Temple of Five Dawns on the Wandering Isle.

Taran Zhu led the Shado-Pan's defense of the Vale of Eternal Blossoms against the forces of N'Zoth. He instructed adventurers with releasing the Ancient Pandaren Spirits that the Black Empire sought to raise in the service of N'Zoth.[14]

Lei Shen must not be allowed to marshal his full strength.

A direct assault on the front gates will take time, and the aid of your Alliance and Horde. But if there is one thing we Shado-pan know it is that where there is a wall, there is a way around.

The sewers at the back of this tunnel lead all the way to the fortress entrance. We must hold this entrance.

Chen said you would come, <name>. There's no time to waste. Help us fight back these demons and reclaim the monastery!

I fear that this is just the beginning.

The vale will not fall!