Not to be confused with Training Dummy. 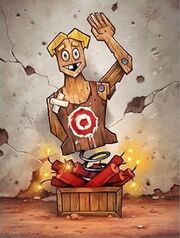 A Target Dummy in Hearthstone.

Target Dummy is a consumable device used to control aggro.

This item is crafted with Engineering (85); taught by trainers.

Once the target dummy is destroyed, items can be looted from it; sometimes including

During the Third War, the commander of one human outpost ordered fake "defenders" built out of sandbags, with damaged armor and helms placed on them to make them look like targets for enemy archers. After a number of orc arrows hit these dummies, a human tinkerer decided to expand on the idea. The result is the portable target dummy, a crate that, when tossed to the ground, expands into a humanoid-shaped cutout bouncing atop a metal spring. The dummy won't fool experienced opponents, but may draw fire from distant enemies or attract the attention of unintelligent foes.[1]