For the Battle for Mount Hyjal NPCs, see Tauren Warrior. 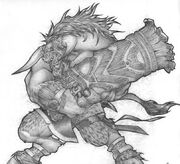 The mighty tauren warriors of the Kalimdor plains have pledged their allegiance to the new Horde out of respect for their courage and honor. The bold tauren seek only to safeguard their quiet culture from the deathly fires of the Burning Legion. When roused, tauren are fierce fighters and use their mighty totems to smash their enemies into the dust of the plains.[1]

Tauren warriors can pulverize enemies by smashing their totems on the ground, creating tremendous shockwaves that ripple out and cause damage in a wide area of effect.[2]

The tauren warriors form the backbone of tauren military forces.[3]

These versatile warriors excel in melee combat, plus they can track, scout and forage for food. Tauren warriors are calm and self-sufficient, not given to boredom and despair like many low-ranking soldiers,[3] and are wise enough not to lose their head in the heat of battle.[4] In large skirmishes, tauren warriors serve as shock troopers and front-line fighters; in small warbands, they might serve as leaders or scouts as well.[3]