The Temple of Storms. 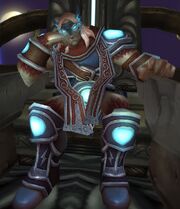 Thorim on his throne in the temple.

The Temple of Storms is a mysterious temple located atop the highest mountain in the Storm Peaks, and therefore all of Northrend. It was built by the titans long ago and now serves as the sanctum of the titan keeper Thorim, the Stormlord. He sat brooding here for some time after the death of his wife Sif at the hands of his treacherous brother Loken. After

[80] The Reckoning, the throne of Thorim is empty, as he is now located somewhere within Ulduar.

The Temple of Storms sits on one of the tallest peaks of the Storm Peaks, right along the western border, so just beyond it the cliffs drop to Icecrown Glacier. Just a quick look to the building is enough to know it is Titan-made. It is similar to the Wyrmrest Temple down in the Dragonblight.

A wide path, one of the only straight channels in this region, leads to massive stone steps that stop at the temple's front door. Crystal golems stand guard at the perimeter so it is not possible to gain access but some claim to have seen shapes moving around within: massive shapes, too big to be anything but storm giants. It is not know if this temple was built for for themselves or for the giants, though. Either way, the Titans have long since vanished and the giants claim this temple as their own. Occasionally lightning can be seen flickering from the dome — not down to it but up from it — so perhaps they are doing something more than worship in there.[1]

Meteorological explanation: Lightning occurs because of a difference in charge between a storm and the ground. The storm cloud acts as the negative force while at the Temple of Storm's spire, a positive charge gained from a stepped ladder gathers energy that is released into the sky; thus the appearance of lightning firing into the sky. Nothing "unusual" here. Because energy always flows from negative charge to positive charge, the event described in the materials requires the cloud to have an excess positive charge and the temple itself an excess negative charge. This is a rare event, but does happen in the real world.