Temple of the Damned

For the Warcraft: Orcs & Humans Human campaign mission of the same name, see The Temple of the Damned (WC1 Human).

Temples of the Damned[1] are unholy places of varying purpose, but mostly related to Necromancy, first used by the Horde and then the Scourge. The Horde's were made of skeletons from the extinct giants of Draenor.[2][3]

The unholy place where orcs came to make sacrifices to their gods, and the Necromancers of the land gathered to invoke the will of their dark masters. This was the only place where Necrolytes could be recruited to assist in purging the land of Human settlements. The need for a blood offering had only recently been replaced by one of gold, and no assistance would be sanctioned until it was made. The immense, sacrificial alters used in the Necrolytes' rituals had to be built of the mystic Blackroot, hence a lumber mill had to be used to locate and specially prepare the wood.[4]

The first Temple of the Damned was a walled Orc base mostly composed of temples constructed deep within the Black Morass,[5] but it was destroyed in the First War by the human forces of Stormwind.

Temples of the Damned - called Grombolar, or bowels of the giant in the Orcish tongue - were the cabalistic dwellings of the dead. Created by Gul'dan to house his blasphemous Death Knights, the Temples were formed from petrified carcasses of the race of giants that inhabited the Orcish homeworld. The subterranean labyrinth of the Temple contained the fetid halls where the Death Knights dwelled and studied their depraved necromancy on fallen warriors reaped from the battlefields above.[3]

On Draenor, some temples were used as seats of power for orders of death knights.[6] 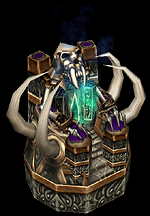 Once used by the orcish horde to channel demonic energies, the Scourge has now reclaimed this powerful edifice. From the Temple the insidious necromancers emerge to animate fallen corpses and the tormented spirits of the banshees are called into service.[7]

Considering the orcish temples of the damned were all destroyed during the Second War,[2] it is unknown how the Scourge reclaimed these edifices and if they still use bones from the giants of Draenor.

The Undercity's Magic Quarter has a Temple of the Damned in it.[8]

In the canceled Warcraft Adventures, a Temple of the Damned was situated in the abandoned ruins of Grim Batol. The temple was occupied by a sleeping death knight from which Thrall had to get some dark magics.