Thaelin Darkanvil is a Dark Iron dwarf and genius engineer of the Dark Iron clan that accompanied the Alliance on the alternate Draenor. He set up a bunker and secret workshop in Gorgrond,[3] but was kidnapped by the Iron Horde who forced him to work for them, until he was saved. Thaelin has numerous creations, among which a personal ram-headed siege engine named The Tank, and a Dark Iron golem named The Suit which he could equip, but it was destroyed.[4] 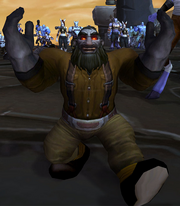 He and Hansel Heavyhands fought in the united Alliance and Horde forces at the Assault on the Dark Portal, serving as a demolitions expert and repair vendor. Thaelin blew a chamber where Teron'gor was held prisoner. He then accompanied Khadgar's group throughout the eastern camps. Near the end of the battle, Thaelin used the Iron Worldbreaker cannon to destroy the Dark Portal. Afterwards, Thaelin and the others left Tanaan.

Later, Thaelin arrived to Gorgrond in order to find his fellow Dark Irons that had come here in mole machines to spy on the Iron Horde, saying that no one knows how to fight the Blackrock clan better than a Dark Iron dwarf. Unfortunately, the mole machines got lost in the wilds of Gorgrond. Thaelin arrived to Naielle's Watch but the camp was attacked by the forces of the Primals. The Rangari blamed him and his invention for the attack. A genesaur knocked him out but it was soon killed by the commander. The dwarf joined with Maraad and Yrel, repaired his tank and brought the draenei into the heart of Gorgrond where he had an outpost built. He started working with the draenei to find his comrades, traveling to the Deeproot jungle. He learned that three of the Dark Irons were killed in Razorbloom. The Rangari also discovered that two of them were in Evermorn Springs where Burrian Coalpart was found and rescued. The two dwarves then moved to Moira's Reach and helped Hansel to load a cannon and fire it at the genesaur Iyu.

Thaelin and the draenei then entered Talador. His inventions helped them to track the invading Iron Horde army led by Orgrim Doomhammer. Thaelin commanded to destroy the orcs' supplies. Not long after, he was delivered a Shredder which he fixed and it was used to destroy the Iron Horde orcs in Tuurem. After it was done, he and the two draenei joined Khadgar on the outskirts of Shattrath City. He and Gazlowe found and repaired an Iron Star which the commander used for quick assault and transport throughout the city. The dwarf then joined the archmage in Shattrath's port where he managed the siege weapons and fired another iron star that destroyed Blackhand's ships. As he fired it, he noticed heroes and Khadgar quickly teleported them.

After the battle, Thaelin arrived to Telaari Station in Nagrand and tried to repair his flying machine. After he received supplies, the machine was used for its last mission in Telaar. Commander found plans which he gave to the dwarf and he had them materialized. Thaelin also sent a box full of young goren to Yrel in Yrel's Watch. The commander caught them and delivered back to Thaelin on Yrel's behalf. Thaelin admitted is was meant to be a joke. The commander released the goren and Thaelin began running as they followed him.

Some time later, he hid himself in his new secret location in northeastern Gorgrond. He was soon found and captured by the Iron Horde. They took Thaelin away but left Hansel there. The orcs convinced him to built them a new machinery near the Thunder Pass. The moles he built were used to attack Lunarfall which triggered the attention of the commander. He found Hansel and together they began searching for the captured dwarf. During his capture, Thaelin had managed to hide a tracking device so the Alliance quickly located him. They used a prototype of a drill and emerged in the Siegeworks. Thaelin was found and he could realize his backup plan - while he was working for the orcs, he also built a robot which he now used for, sending moles to his station and destroying all the machinery built for the enemy. After it was done, he commanded to kill Overlord Blackhammer who had got his notebook. They eventually returned to Hansel in a nearby cave but the robot, the Suit, did not survive. They returned briefly to Lunarfall, thinking about opening a new shop.

For the Horde characters, Gazlowe and the commander worked together to find Thaelin. Once they got him, the goblin gives him fuel and the dwarf flies away. As a token of gratitude, he sent a transport mole to Gorgrond in Lunarfall and Frostwall.

He is next seen alongside the Alliance army and the Exarchs near the Gates of Tanaan where the Warchief Hellscream "invited" them to Tanaan.

After Gul'dan took over the Iron Horde, Thaelin accompanied the Rangari scouts and the Alliance into the Iron Docks. He later provided Maladaar a powered ram to bring down the Tanaan Gate.

Thaelin was aboard the Wind's Redemption docked at Boralus in Kul Tiras, and he traveled to Xibala on Zandalar to aid the Explorer's League.

Later, Thaelin was smelting Azerite at the Black Anvil in Shadowforge City when

[Ironfoe] was stolen from him by the Venture Company. The Black Anvil was also damaged in the attack.[5] After Ironfoe was recovered by the Alliance champion, Thaelin delved into the Molten Core with them to recover a piece of the core that they could use to repair the anvil.[6] Once Dark Irons formally join the Alliance (as before it had been unofficial) Thaelin can be found at the repaired Black Anvil in Shadowforge City. He now acts as Ironfoe's keeper.[7]

Assault on the Dark Portal

Dark Iron Golem is implied by him.

This is all my fault ya know. I gave them dwarves coordinates to where I thought we could get a good listenin' post on the Blackrock orcs.

I dinna realize just how much the locals could disrupt mole machine navigation.

Almost anything can be fixed with a wrench and a good swingin' arm.

She's a beauty, there's no doubt about it. We do good work together, <name>.

We're going to crush the Warsong!

Thaelin, let's change this building into a corral.