Thal'kiel was one of the greatest eredar sorcerers of Argus many years before they entered the service of Sargeras. A sorcerer of unmatched talent, he led an order of eredar magi and conjurers known as the Wakeners. Driven by ambition, he began secretly summoning large amounts of demons, and planned to install himself as dictator of Argus. However, his apprentice Archimonde revealed the plot to Argus's rulers — Velen and Kil'jaeden — who banded together to strike him down, with Archimonde himself beheading his former master. After Thal'kiel's defeat, his skull, later known as the

[Skull of the Man'ari], was gilded by Archimonde and placed on display as a warning. It was then passed from demon to demon, until the dreadlord Mephistroth, who used it to enhance his ability to summon and command demon armies for the Burning Legion, lost it to a champion of Azeroth.[3]

Several years before the coming of Sargeras to Argus, Thal'kiel was a sorcerer of unmatched talent who led an order of eredar magi called the Wakeners, specialists in the arts of conjuration and binding. The magi summoned arcane constructs to help build the architecture of Argus' capital, while Thal'kiel himself devised machines to focus the planet's latent arcane energies. For his work, the sorcerer was greatly admired. There were rumors that Thal'kiel's young apprentice, Archimonde, coveted his master's power and influence, but Thal'kiel himself dismissed these claims, for Archimonde had showed him nothing but devotion, having even gone to great lengths to create a custom-made crown for the eredar leader, taking the measurements for his head himself. At the time, Thal'kiel and Archimonde were among the most prominent proponents of phrenology — the study of skull shape as a means to determine intellectual aptitude — and Thal'kiel, in particular, was noted for having the archetypal sorcerer's skull, for which he was widely admired.[1]

However, Thal'kiel was never one to rest on his laurels and thirsted for more. In search of ways to elevate the Wakeners to levels undreamed of, his spells plumbed the Great Dark Beyond in search of even greater power, and one day he received an answer. A dark presence began to whisper to him, showing him visions of unimaginable power and giving the sorcerer the ability to start summoning various lesser demons, which the eredar then immediately spread to his Wakeners. Afterward, he despised the arcane, his passion reserved only for fel magic. Believing this to be the start of a new era, Thal'kiel prepared to present his new pets to the rulers of Argus, Velen and Kil'jaeden.[1]

In the presence of the eredar rulers' inner circle, Thal'kiel demonstrated his new abilities by first summoning scores of his old arcane constructs in orderly rows, and then calling down a storm of infernal meteors to destroy them as a symbolic display of the new era. However, when he looked upon his colleagues' faces, he did not see the approval he had expected. Kil'jaeden's expression was remote and inscrutable, but Velen harshly condemned Thal'kiel's actions and forbade him from ever conjuring demons again, denouncing his "new era" as a failed experiment.[1]

According to the journal of an anonymous Wakener, Thal'kiel withdrew to his chambers for weeks following the disastrous demonstration. He neither ate nor slept, his only companions being the demonic minions he summoned and then banished in rage — at least, that is what the Wakeners assumed, since all they could hear were the shrieks of imps being thrust back and forth between Argus and the Twisting Nether. They could also sense other, larger entities with him, "shadowy apparitions of baleful influence," but Thal'kiel's servants swore that no one had entered his sanctum. When he finally emerged, Thal'kiel had aged by the centuries, his back having become twisted and stooped and with an odd glimmer in his eye. He summoned his Wakeners, and then simply said: "The new era begins."[1]

In secret, Thal'kiel and his Wakeners resumed their demonic experiments, conjuring increasingly powerful demons and casting powerful spells to hide their minions from the eyes of Velen and Kil'jaeden. Over time, they amassed a great demonic army with the sole purpose of installing Thal'kiel as the dictator of Argus. The Wakeners were united behind their leader, save one: Thal'kiel's apprentice, Archimonde. While he had no aversion to demons, the ambitious Archimonde was eager to prove himself to the leadership of Argus, and the night before the planned coup, he snuck away and revealed his master's plans to Velen and Kil'jaeden.[1]

Archimonde himself broke the wards hiding Thal'kiel's army and led a contingent of magi to storm the Wakeners' secret training grounds. The Wakeners were caught off guard and easily defeated, and the demons were quickly slaughtered when they found themselves leaderless. As Thal'kiel tried to summon in more reinforcements, Archimonde decapitated his former master with a single stroke of his blade. The eredar now known as Talixae Flamewreath, another student, escaped the raid as she was mysteriously missing at the time.[2] After the battle, the Wakeners' bodies were burned and their writings destroyed, and their screams echoed across Argus, as a grim reminder of the price paid for dealing with demons. Archimonde was hailed as a hero and would later rise to lead the eredar alongside Velen and Kil'jaeden.[1] Thal'kiel was succeeded as High Wakener by Aargon.[4]

Archimonde soon commissioned one of Argus' finest jewelers to gild Thal'kiel's skull and then proudly displayed it in his domicile, ostensibly as a an example of the dangers of the dark arts and a warning to the other eredar not to follow in Thal'kiel's footsteps, though in truth he had it adorned with metals that would enhance its magic-channeling abilities. Over time, however, a demonic presence slowly infiltrated Archimonde's mind, using Thal'kiel's skull as its conduit. While Archimonde slept, he saw visions of a glorious army consuming civilizations in fel fire under the leadership of a dark god, and he became eager to learn more about this mysterious being and his legions. When Sargeras arriverd on Argus, Archimonde was thus the first to accept the Dark Titan's offer.[1]

Archimonde continued to use his former master's skull in service to the Burning Legion for some time, using it to exert his control over multitudes of demons to obliterate his opponents, but it has since passed between a handful of Sargeras' most elite generals. Mephistroth was the last to be seen with Thal'kiel's skull.[1]

"Hah! Do you think you're the first creature from a doomed world to beg for my aid? No, you will burn before the Legion's power and I'll continue to suffer in servitude to these mongrels for the rest of eternity. Save yourself the wasted effort and go jump into a fire!"[5] 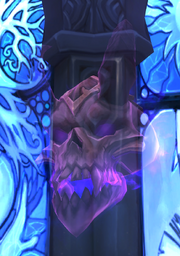 Thal'kiel's skull, now known as the

[Skull of the Man'ari], is one of the artifacts chronicled in the Tome of Blighted Implements, a grimoire held by the pit lord Jagganoth in Dreadscar Rift. After the newest member of the Council of the Black Harvest — a warlock adventurer — escapes from the rift with Calydus, the two set out to find Mephistroth and retrieve the skull to rescue the other members of the Black Harvest from Jagganoth's domain. By conducting a dark ritual, the adventurer manages to contact Thal'kiel's spirit and attempts to convince the eredar to reveal where his skull is being held by Mephistroth. Thal'kiel initially refuses, but the adventurer manages to convince him by insulting his pride and telling him that by working together, they can make the Legion bow before them. Thal'kiel's spirit reveals his location to be Felsoul Hold in Suramar before disappearing. Using one of Calydus' portals, the adventurer fight their way through Felsoul Hold, confronting Mephistroth and his minions and finally succeeding in defeating the dreadlord before he has a chance to destroy the skull. The warlock picks up the skull, and together, they and Thal'kiel return to Dalaran.

Main article: Skull of the Man'ari#Quotes