The Assault on Shaol'mara begins the second stage of the Isle of Thunder storyline. Jaina will only offer this quest on deck of The Seabolt once enough realm-wide progress has been made, irrespective of the individual player's standing with the Kirin Tor Offensive.

The quest mostly plays out in a single-player scenario also called "The Assault on Shaol'mara". As the scenario can only be done once, it is documented here and not in a separate article.

Complete the Assault on Shaol'mara. Speak to Jaina Proudmoore to begin the attack.

Our scouting efforts along the coast have given us valuable intelligence about the island, <class>.

However, we will accomplish nothing if we do not advance forward onto the mainland.

I have assembled a team of our most elite aerial units to begin the attack.

I would like you to join the assault. A champion such as yourself could turn the battle in our favor at the critical moment.

When you are ready to begin the attack, speak to me.

We must claim a better strategic position on the island itself.

Yes! You have done it, champion!

Now, the Thunder King will taste the full force of the Kirin Tor! 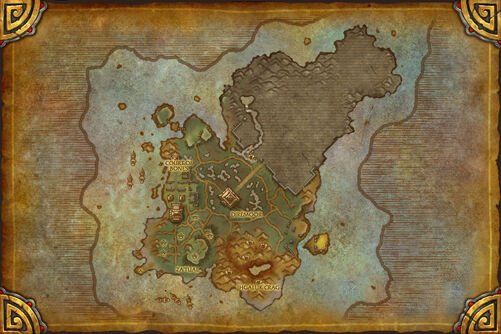 I am ready! [Queue for solo instance.]

This will put the adventurer in the queue for the solo scenario Assault on Shaol'mara.

Mount the Silver Covenant Hippogryph and fly with Ranger Vereesa Windrunner over the island.

Hop on the hippogryph that Jaina is standing next to.

Arcanital Mara'kah says: They come! To arms me brothers - hurl them back to the sea!
Vereesa Windrunner says: So much for the element of surprise.

Two Shaol'mara Beastcallers and four Shaol'mara Raptors move in for the ambush. Finish them off.

Arcanital Mara'kah says: You have not seen the full might o' the Zandalari!
Vereesa Windrunner says: They are falling back! We need to press the assault before they can regroup. Follow me!

Vereesa Windrunner says: The entrance is barricaded. Break it down!
Arcanital Mara'kah says: Hold the ruins. Slay them where they stand!

Arcanital Mara'kah says: Crush the intruders. The barrier must not fall.
Vereesa Windrunner says: Be quick on your feet - that is no ordinary Zandalari!

Pakutesh is riding Anki, a level 90 direhorn with 2 million health. Anki must die before Pakutesh can be attacked. Pakutesh also has 2 million health. There is a Devil's Blood Elixir on a table near outside the front of the pen that will heal for 5% of total health every three seconds for 30 seconds once consumed. There is another in the back-left corner of Anki's pen.

Vereesa keeps moving southeast down toward the island, stopping at the base of the steps. There are a few spearrangers and a beastcaller blocking the way. The beastcaller will summon a huge amount of raptors!

Once all of the raptors are dead, take a moment to heal up and prepare to fight Mara'kah.

Marakah is a level 90 zandalar troll with 2.7 million health and the following abilities:

Try to stay in one of the Arcanital's Barriers he spawns, but keep Mara'kah out of it, as it will limit the damage he takes as well. Try to interrupt his Arcanital's Spark ability and sidestep out of Waves of Light. Make sure to get under a shield when the spirit mask winds up a Hymn of Silence, which is cast every 30-40 seconds. There is a Devil's Blood Potion on the altar behind him, and there is another inside the big tent.

Leave the instance and turn in to Jaina.

Lady Jaina Proudmoore says: Champion, you have exceeded my expectations. Our position on the isle is secured, thanks to your courage and your will. Now, the true work begins.

This completes the "Build a Base" portion of

Immediately behind Jaina's new position on the Violet Rise is an Assignment Map, which starts the day's round of questing by offering a choice for daily questing, PvE or PvP. See the Assignment Map article for more information.