The Big Bad Wolf is a worgen boss in the Opera House in Karazhan. He drops the rare pet

He can also be found backstage in Return to Karazhan standing next to Grandmother. 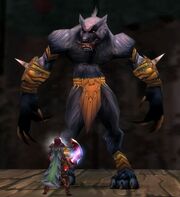 Terrifying Howl - Instant. Causes nearby enemies to flee in fear for 3 sec. Cast every 25–35 seconds.

Wide Swipe - Instant. Stuns the current target for 4 seconds. Casts about as often as Terrifying Howl. This can be used against a target with the Little Red Riding Hood debuff, possibly guaranteeing death.

Ranged DPS classes can continuously damage the wolf provided that the tank does not lose aggro. They can continue damaging while the wolf is chasing Little Red Riding Hood. Melee DPS classes have to be more careful due to the fear. However, any damage caused while the Big Bad Wolf is chasing someone will add to his threat list, regardless of your inability to pull aggro during that time.

All non-melee players (ranged DPS and healing) should stand close together in a corner about a third to half the stage length from the wolf being tanked on the adjacent wall.

When the wolf casts the Red Riding Hood debuff on you, you must run around the perimeter of the stage. Stay very close to the wall without touching or hugging it, as this will slow down your running speed. The wolf should be a short distance behind you at all times, but out of melee range. After running about 1.5 times around the stage, the debuff will wear off and the wolf will most likely run back to the tank as long as sufficient aggro was generated.

Intro
Barnes yells: Good evening ladies and gentlemen, welcome to this evening's presentation!
Barnes yells: Tonight, things are not what they seem... for tonight your eyes may not be trusted!
Barnes yells: Take for instance this quiet elderly woman waiting for a visit from her granddaughter.... surely there is nothing to fear from this sweet, gray-haired old lady!
Barnes yells: But don't let me pull the wool over your eyes! See for yourself what lies beneath those covers! And now... on with the show!

Dialogue with Grandmother
Hello, my child.

Oh, grandmother, what big ears you have.

The better to hear you with, my child.

Oh, grandmother, what big eyes you have.

The better to see you with, my child.

Oh, grandmother, what phat lewtz you have.

Aggro
The better to own you with!

Ugh. If they aren't going to put our show back on soon, why do I have to keep this stupid suit on? It's so itchy.

I don't do that anymore!