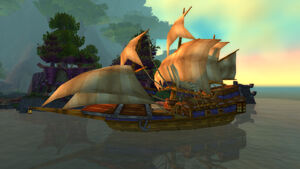 The Bravery docked at Rut'theran Village 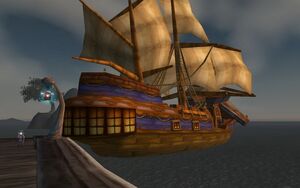 The Bravery leaving the port of Auberdine before the Cataclysm.

The Bravery was an Alliance crewed vessel offering transportation between Stormwind Harbor and Rut'theran Village near Darnassus. On departure from Stormwind, passengers who remain on deck were treated to sweeping vistas of Stormwind City, the harbor and lighthouse. In the lower cabin, Galley Chief Gathers offered food and drink, and Engineer Brightbuckle offered a variety of supplies and repair services. Approaching Rut'theran Village, one could get a sense of the enormity of Teldrassil. Passengers bound for Darnassus would proceed up the hill from the dock and pass through the portal tree. For a more leisurely transfer to Darnassus (flight time approximately two minutes) with panoramic views of the Veiled Sea and Teldrassil, as well as for destinations beyond Teldrassil in greater Kalimdor, travelers would speak to Hippogryph Master Vesprystus near the portal tree. Elune's Blessing sailed for the Exodar from a dock across the meadow to your left as you deboarded. Passengers continuing on to Dolanaar could speak to Vesprystus, or step through the portal tree and speak to Hippogryph Master Leora in Darnassus, just to the left as they exited the portal.

Passengers departing Rut'theran Village for Stormwind or other destinations in the Eastern Kingdoms would meet The Bravery directly down the hill from the portal tree and flight point. (The dock to the left as you descend was not in service at the time.) Connecting passengers arriving on Elune's Blessing from Azuremyst Isle would proceed across the meadow and then to the right upon reaching the path that descended from the portal tree.

After the Burning of Teldrassil the Bravery was removed from service as it went under repairs. A portal to Darkshore took its place in Stormwind,[1] while The Relentless began docking where it used to.

A portal from the dock in Rut'theran to Stormwind is provided for level 1-109 players, and players level 110 or above that have spoken to Zidormi in Darkshore to travel to the past.