The Call for Allies (Horde) 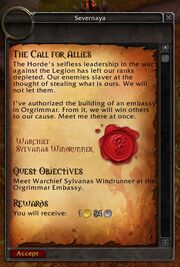 Greetings, champion! I have been appointed as the Horde's diplomatic ambassador to our allies far and wide.

It is my duty to seek out those of like mind and spirit, and speak to them about joining the Horde.

As a renowned hero of the Horde yourself, your aid would be most appreciated! Come see me at the embassy in Orgrimmar when you are able.

The embassy's interior in Patch 8.0.1

The subject of this section was removed from World of Warcraft in patch 8.2.5.

The Horde's selfless leadership in the war against the Legion has left our ranks depleted. Our enemies slaver at the thought of stealing what is ours. We will not let them.

I've authorized the building of an embassy in Orgrimmar. From it, we will win others to our cause. Meet me there at once.