Not to be confused with Crone.
For opera event details including tactics and loot table, see Wizard of Oz. 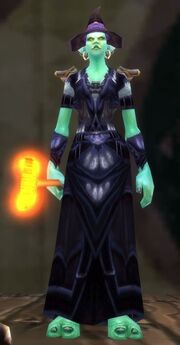 The Crone is a jungle troll boss in the Opera House in Karazhan, who follows Dorothee, Roar, Strawman, Tinhead, and Dorothee's pet Tito.

She can be seen in the backstage during the Return to Karazhan.

Cyclone - Knocks the player up into the air. Take fall damage.

Chain Lightning - 45 yd range, 2 sec cast, Strikes an enemy with a lightning bolt that arcs to another nearby enemy. The spell affects up to 5 targets, inflicting greater Nature damage to each successive target. 2775-3225 damage.

The Crone is the only loot source for the Wizard of Oz event.

Killing a player
Fixed you, didn't I? <cackles>

Death
How could you? What a cruel, cruel world!