The Diary of High General Abbendis

The Diary of High General Abbendis is the updated version of

[The Path of Redemption], which was handed to disguised death knights whilst accepting the quest

The Diary of High General Abbendis can be found within New Hearthglen of the Dragonblight. [68, 76] 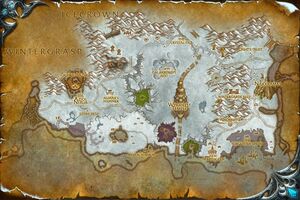 This item is an objective of

The Diary of High General Abbendis

The voice whispered: "Come to me." From the very beginning I knew that it was the Holy Light speaking to me in dreams. At last! After all of my years of prayers and good deeds, the cleansing of the blight of the unliving from the face of Azeroth. After all of the failures and resurrections.

It happened again. "Come to me ..." the Light commanded.

I woke up freezing, but it wasn't cold in my chambers. I'm going to redouble my efforts! I'll tell the high abbot tomorrow that I want prayers increased. No more half-measures!

The Holy Light has taken notice of our good work. I can feel it!

This time I was awake! It was very vivid, and yet for over a minute, in the middle of the warm, sunny day, my breath came out misted and chill. One of the priests noticed and dropped to his knees in prayer.

No one else heard the voice, thought. At least the witness proves that I'm not going insane. Maybe I should ask Landgren to pray on the matter?

I'll get Jordan and Street to scrutinize their recruiting efforts tomorrow. We've grown bloated with ranks of unbelievers who yearn only to destroy the undead. That's not enough!

The commander and the bishop were both receptive. Not that they had any choice. Bishop Street in particular seemed very enthusiastic. He spoke of a revival for the Crusade and swore to ferret out the weak of faith within our ranks.

I told him to go easy. I've no intention of destroying the Crusade. However, I do like the sound of forming an elite cadre of the most faithful to do the Light's bidding in Northrend. I fear the man's friendship with LeCraft is slowly twisting him. They both have their uses, though.

I will leave most of the Crusade here to continue mopping-up operations on the undead in our backyard. I imagine that once they have finished what we began, most will disband and go back to their homes to live in peace.

That somehow seems right. At our finest, we have always been the salt of the earth, rising up to take back our homes from the filth of the Scourge corruption, to return our Lordaeron to its former glory. To a time before the Scourge. Before Arthas and regicide... before the Lich King.

There have been whispers amongst the men about a day soon to come that will change everything for the Scarlet Crusade. Bishop Street has put a name to it, calling it the Crimson Dawn.

I will put some thought to this, thought I can feel the truth of it in my bones. I pray that it will bring weal for us rather than woe.

The Light has spoken again with a great deal of urgency. I came away from the dream with a sense of impatience. I will not disappoint. There must be no more delays. We must soon be underway!

What a great coincidence then - and I had to control myself from showing my relief - this afternoon Captain Shely procured for us a number of new ships for the voyage. Perhaps it was no coincidence at all? The Holy Light expresses its will in ways that we are not meant to understand.

I will take the Sinner's Folly as my flag. I think the name is most fitting.

Now I know why the Light has been pushing me to be underway. In the dead of night a Scourge Necropolis appeared in the sky over us and out poured the minions of Hell!

A new breed of death knights lead the assault. Already the casualties we've suffered have been catastrophic. With the Scourge able to strike at us anywhere and at will from above, there seems no way to mount a proper defense.

I fear that our intended expedition to Northrend is over before it has begun.

I've been informed that Hearthglen and the surrounding area have already begun to assemble a host. High Commander Galvar Pureblood himself intends to lead them to save us. His efforts will be for naught.

I must see to it that my best couriers get through the enemy lines and warn him off. Hearthglen must prepare to dig in and rally the rest of the Crusade.

With any luck, they'll get through before nightfall.

There's been no word from any of my couriers this morning. It's clear that none of them made it through to Hearthglen. The Plaguelands are lost. Pureblood will come with his forces and they'll be annihilated out in the open.

This afternoon I received a vision from the Light. In it, I saw the utter destruction of everything that we've built here. The message was clear - I was being told to take the remainder of the most faithful and abandon the Crusade to their doom.

Landgren later told me that he'd received the same vision. I cannot comprehend how the Light would tell us to take such a dishonorable action. But it is not my place to question - I am to obey, and obey I shall.

It was with trepidation that I gazed upon New Avalon. I suspect for the last time. Our fate lies in Northrend. I am filled with a sense of ominous foreboding for some reason. The mission ahead should shake away these concerns. I will put them out of my mind.

Perhaps with luck, High Commander Pureblood will somehow endure and marshal the survivors. I'm a coward - a dog running away with my tail tucked between my legs!

Two months they tell me that this journey is going to take. The other ships aren't built for speed like the Folly. They're carrying most of our forces and equipment, and they're not much more than single sail freighters, but they'll get there safely.

I'm not looking forward to this, but for the Light I will endure the sea sickness. I simply mustn't let the others see.

I've not written in a while. It's as much as I can do to stand upright and not get sick. The men are beginning to wonder why I keep myself holed up in my cabin most of the time. It wouldn't be good for morale for them to see me this way.

It shouldn't be long now. I pray that it won't be. Six weeks already and every day it seems that the weather, gets worse. I can only hope that Northrend itself does not have such horrible weather. I wasn't built for the cold.

The Holy Light has been silent for a very long time.

We were attacked with no warning whatsoever! Giants in massive oared longships came out of the mist like ghosts! They were silent as the dead.

I lost a ship and all of the men on it. We fought with great courage and skill considering that we have only the most rudimentary naval combat training.

Afterward, the screams of our men who'd been taken captive by the giants echoed across the water. After a while it grew silent again. Bishop Street led the men in prayers.

I awoke this morning in the middle of making adjustments to my maps. The Light was guiding my hand showing me exactly where we must go.

Exiting the rowboat upon the beach, I planted our banner and was overcome by the Holy Light, which spoke through me. Today is the Crimson Dawn - the great day that we've waited for. This is to be the site of New Hearthglen. We are no longer the Scarlet Crusade. We are now the Scarlet Onslaught!

And an onslaught upon Northrend we shall be! The cancer of the Scourge threatens to overflow in the crown of the world and drown the rest of us. The time has come to take the fight directly to the Lich King's doorstep!

It's been almost a month now and construction has proceeded apace. I've been too busy to write. My scouts tell me that this land is full of dragons and other strange beasts. We'll keep to ourselves until we're ready.

In the middle of services today, the High Abbot proclaimed that a visitor would arrive soon - one that the Light was sending to lead us to victory.

I don't know how I feel about that. Why didn't the Light tell me? Have I not served faithfully? Now I'm to be replaced by some outsider?

Admiral Barean Westwind showed up on my doorstep tonight! By all accounts he'd died upon these shores an age ago.

He didn't look old enough and yet I knew that it was him. He claimed that he was the only survivor of his doomed fleet and that he'd survived only through the good graces of the Light.

We stayed up speaking through the night and into the morning. He assured me that he had no intention of taking my place, but that the Light had instructed him to travel across the Great Dragonblight to serve as my advisor and commander in title only. He claimed that great change was coming to Northrend. The Alliance and the Horde were going to come en masse in response to a great plague that the Lich King was about to unleash upon them.

The men have taken to the grand admiral with great zeal, especially High Abbot Landgren and Bishop Street. Apparently the Holy Light whispered a new blessing to the admiral in his sleep, which he passed on to Landgren. Some of the men have converted to the priesthood and are now being called "raven priests".

Only Jordan seems unimpressed. I suppose that's understandable. He probably feels his position is threatened if mine is.

Something doesn't seem right. I can't put my finger on it, but I cannot make myself fully trust the Admiral. He's done nothing wrong. Quite the contrary! And yet, I have to trust my gut.

I will pray for understanding. The Light delivered the Admiral to lead us to victory and it is not my place to question its decisions. I will continue to obey. I am faithful.

Another couple of months have passed. We've made great strides in the construction of New Hearthglen. The wall is almost complete as is the barracks. Kaleiki's men are miracle workers.

My heart hasn't been into writing. I've been avoiding putting my thoughts here for some reason. The Light hasn't visited me of late, though the Admiral assures me that this is nothing to worry about.

My men report that a small group of Forsaken have broken ground on a camp along the hillside to the north. On the other side of the hill, the Alliance have apparently begun the construction of a much larger base.

The Admiral says that we should leave them be. There are other Horde forces gathered to the west that would surely come to their aid if we were to attack. I don't feel good about it, but I see the logic in his reasoning.

The first phase of construction is done. Admiral Westwind has ordered a group of my men to establish a toehold further to the north. He wouldn't go into detail, claiming that he was being guided to do so.

We caught four spies from the Forsaken town, Venomspite, this afternoon. I'm going to have LeCraft torture them for information. If we only caught four, how many more have slipped in amongst us?

Why do I feel as if things are beginning to unravel?