The Edge Of Winter (Horde Aspirant)

Magister Edien Sunhollow at the Argent Tournament Grounds wants you to bring him Winter's Edge.

Curse that death knight for breaking my sword!

In southern Crystalsong Forest, overlooking the Crystal Vice's exit, you will find Lord Everblaze. Kill him and take the everburning ember from his corpse.

Bring it to the center of Winter's Breath Lake in northern Howling Fjord, and use it to free the maiden encased in ice. She is the guardian of an ancient sword and will award it to whoever frees her.

Prove your worth and earn the weapon that she has guarded for so long, <name>.

Did you win the blade?

The blade is as fine as the stories say. It would seem there's little reason to complete the repairs on my costumary blade. Winter's Edge is far superior and I will continue to carry it. You have my thanks, <name>.

The Crystal Vice is at the northern edge of Dragonblight bordering Crystalsong Forest. Lord Everblaze is situated just to the east of the path coming out of Dragonblight high up on the ridge at [54.8, 75.0] 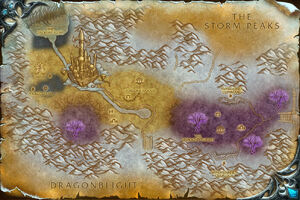 Take the Ember to northern Howling Fjord. Players with slower flying mounts may want to take connecting flight paths to Camp Winterhoof or Fort Wildervar. Winter's Breath Lake is the lake south of Gjalerbron and Camp Winterhoof. On a floating patch of ice at the center of the lake ([42.2, 19.7]

) is the Maiden of Winter's Breath Lake, a frost nymph encased in a block of ice. Use the Ember to free her from the Curse of Ice and retrieve