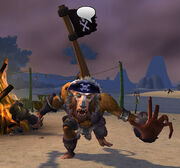 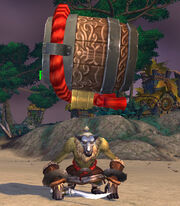 Who beat me in a drink drink boogaloo.

He took the mallet's handle for winning,

Not knowing you can't beat the King in drinking.

Monkey King had to hide the mallet from the bell,

But Ingoo's children do not use the handle well.

Over the years they have used the handle to do harm,

Now we must find the current chief so we can disarm.

Go south to Unga Ingoo, Monkey King meet you there.

Only wikkets show to a party with hands bare.

In pieces three the mallet be. Handle, head and ointment. You ring bell without the mallet? You going to get an ear and face full of evil.

[90] The Harmonic Ointment before heading out.

close to the Cradle of Chi-Ji, The Monkey King, riding on a few Personal Assistants with a few Royal Keg-Havers are having a party over the objections of Chief Ingoo Ingoo XVII.

Poor Chief Ingoo Ingoo. His family forget what rod was for. He so mad.
If he keeps, he will corrupt his people. Very sad.

Finish him off, then turn in to the Monkey King right next to him:

The Monkey King says: We will return to Lion's Landing. Meet us there when you have everything.

is the Royal Finder standing at the mouth to a virmen den. Speak with him:

Fluffy wikkets stole the mallet head! Kunzen hozen lost it many years ago. Now the fluffy wikkets hide insie their lair and worship the head like it some kind of fancy shmancy carrot.
Be careful, those fluffy wikkets bite hard.

Skiggit, the Keeper of the Light Thingy, is being admired by a dozen Light Watchers. Skiggit has a million health, so take it out, then loot the

[Mallet Head] hanging from the ceiling. There is also a Virmen Treasure Cache on the left-hand side of the cave from the entrance...

Exit the virmen den and start heading north along the Serpent's Spine to it's northern end in northeastern Townlong Steppes. An unnamed mogu camp has taken over the area, where at [62.6, 34.1]

The Blade can be found. He is a level 90 elite mogu with more than a million health. Kill him, then loot the

[Harmonic Ointment] from him. There is also an Abandoned Crate of Goods in the tent behind him...

On completion of all three, adventurers will complete the "In Search of Harmony" portion of

[Operation: Shieldwall Campaign], and a short script event plays out:

I hear you've been working with Prince Anduin on a counter to Garrosh's new toy. Listen <name>, you take care of that kid. He might be in over his head on this one. Watch his back.

During the Cataclysm Anduin helped SI:7 track down a Twilight's Hammer cult operating right inside Stormwind. That kid's going to be a King someday, and not just because of his birth. You keep him out of trouble!