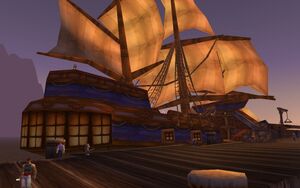 The Lady Mehley is a human crewed vessel that allows transportation between Menethil Harbor and Theramore Isle.

The Lady Mehley transports Alliance players to the ruins of Theramore at the beginning of the Theramore's Fall scenario. Though the city is in ruins, the harbor is intact, and the boat will still run there.