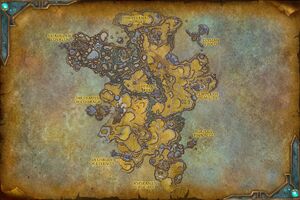 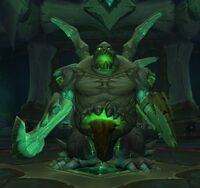 Baroness Antolyte
"Baroness of the House of Constructs. Commander of the Maldraxxi reinforcements."

The evil that threatens Bastion crumbles beneath us. But if we allow this cruel baroness to evade justice, we have not won this day.

She cowers in the necropolis above, casting her shadow on this once sacred temple.

We will pull the dagger from our backs. This wound will heal.

This is all that remains.

May her memory fade from this place.

Xandria says: We have but one enemy left to slay. Speak to me when you are prepared.

You will atone for your people's crimes.

I'm ready. Fly me to the necropolis.

Xandria grabs Alexandros and the player and flies to the interior of Zolramus, where Antolyte is waiting.
Baroness Antolyte says: Enough of your meddling! Face me, so that I might crush you once and for all!
Xandria says: Coward! I will rip your carcass from my temple and cast it into oblivion!

Baroness Antolyte says: All of Bastion will be ours!

Baroness Antolyte says: You... will never... win...
Xandria says: At last, the darkness clears from my temple... Yet, I feel it will not be absent long without action.
Alexandros Mograine says: The Constructs are nothing if not persistent. But I swear to the Light that we will purge them from Bastion.