The Power to Survive

Select an artifact weapon to pursue.

(Altruis)
Illidan and I may have disagreed, but he was unarguably powerful. He was pivotal in vanquishing some of the Legion's most powerful soldiers.

However, that may not matter much longer.

There are two pairs of blades rumored to be more powerful than even Illidan's that may still be within reach.

Regrettably, our numbers are too few to hunt both while maintaining our vigil over the Legion. I fear our window of opportunity is waning quickly.

As the ranking Illidari, that decision falls to you.

(Kayn)
We have long relied on Lord Illidan to vanquish the Legion's strongest warriors - many have expressed concern over our efforts without him.

Thankfully, their concerns may not matter much longer.

We know of two pairs of blades rumored to be more powerful than even Lord Illidan's that are not yet out of reach.

If we act quickly we should be able to hunt down one without forsaking our watch over the Legion's movements.

I must defer judgment on which is most worthy of our time to you, <name>.

(Altruis)
You must move quickly - our time is short.

(Kayn)
Well chosen. There isn't a moment to spare. 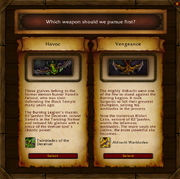 We are indomitable. We are Illidari.

Let nothing stand in your way!

Illidan may have been a fool, but he was a powerful fool - he was pivotal in vanquishing some of the Legion's most powerful soldiers.

There are two pairs of blades rumored to be more powerful than even Illidan's that you might obtain.