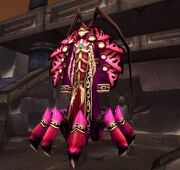 Prophet Skeram guards the entrance to the Temple of Ahn'Qiraj.

The Prophet Skeram is an important religious leader in Ahn'Qiraj, and author of The Prophecy of C'Thun. He is the first boss found in the Temple of Ahn'Qiraj and must be defeated for access to the rest of the zone.

The first boss encounter is a short jog from the entrance of the zone, five trash pulls away. The trash consists of three individual Obsidian Eradicator and two groups of Anubisath Sentinel x4. The respawn on all the trash up to the Prophet is 30 minutes, so unless you are extremely quick at killing the trash, and wiped really quick on the Prophet, it is best for the raid simply to wait for all the respawns before you start another attempt. Similar to Majordomo Executus, the Prophet Skeram requires skill and strategy to beat over the quality of gear.

5 of each class would be recommended, and at least three Warriors geared as Main Tanks. Ideally, 6 Warriors and/or Feral Druids (two for each teleport spot) will allow all the Prophet's Images to be tanked, even if they all are using Mind Control on a tank. It is key that these tanks do not move from their assigned location, and if Mind-Controlled, they return to their spot.

When the Prophet splits into the three, they will initially all Blink to separate spots and must be immediately tanked before he starts spamming Earth Shock. The easiest method to control this is to have two tanks at each of the three Blink point (Middle, and Left/Right stairs) so that if one is Mind Controlled, the other can still pick up the mob. Skeram and his images may Blink and group up in one of the three locations, so healers need to be alert and tanks must immediately pick up the new mob.

The Rogues should split up and put at the three Blink locations as well, but remember to keep a maximum of four players at each Blink location, to avoid the Arcane Explosion. The Healers should also be split into roughly 3 groups, to heal the three melee groups, and to spot heal the rest of the raid. All of the rest of the ranged DPS should head to the top of the steps and move back and forth as Skeram Blinks to a new location.

Mages have a specific role however, their main job is to

[Polymorph] anyone that gets Mind Controlled. They should split up and take positions along both sides of the steps so they can have the best LoS possible. They may go on DPS as long as there are no players to sheep. One Warlock, on each side as backup, can help by fearing players as well.

The most important aspect of this encounter is the splitting that the Prophet will do at 75%, 50%, and 25%. Once he reaches each of these levels of health, he will disappear for a moment, and then three new Prophets will appear, only one of which is the real boss, and initially all in separate Blink locations. The illusions themselves can also Blink to the other locations, often stacking on one another. This is another reason why two tanks in each corner are essential because if two Prophets are in a corner, a tank is almost guaranteed to become Mind Controlled. If this does happen, try to have an extra tank run in to take up the extra spot, or have one tank from the now vacant corner run over and try to pick up the slack. While the raid kills the two illusions, mages must continue casting polymorph on anyone who is affected by Mind Control. Speed is of the essence at these three points in the encounter. Everyone will be scrambling to do their job, and if players are slacking, tanks will die from the extra damage, or non-sheeped Mind Controlled players will start 1 or 2-shotting individuals in the raid.

This strategy is a little more specific about placement. It requires a minimum of 6 warriors but is much more likely to be successful.

Tanks: Tanking is a very important part of this fight, it requires quick thinking and response. Raid leaders, give each of the six tanks his/her own MT window in CT_RaidAssist. Tell everyone in the raid that MT1 and MT2 will be in the middle platform for the full duration of the fight. MT3 and MT4 will be on the left platform. Finally, MT5 and MT6 will be on the right platform. Designate MT1 to be the first to run in when the fight starts and begin tanking as usual. When Skeram is blinking regularly (not splitting), only MT1, MT3, and MT5 will taunt him when he comes to their platform. The secondary tanks (MT2, MT4, MT6) will ONLY autoattack when a single Skeram is on their platform. The main job of the secondary tanks at each platform is to watch carefully during a Skeram split for when a second image blinks on top of one while it's already being tanked. Have that secondary tank immediately identify the second image and taunt him as quickly as possible to avoid earth shocks, then drag him to another platform carefully, and have the main tank (MT1, MT3, MT5) of that platform pick it up. During a split, have the tanks call out if he is tanking an image or the real Skeram, call DPS to start immediately on the first identified as an image.

Rogues: Split your rogues up through this fight to have as few on each platform as possible. The rogues should also stand inside Skeram in front of the tank. The rogues will always be mind-controlled before the tank if this is done correctly. If you have 3 rogues in the raid, assign each one specifically to stay at either the middle, left, or right platform for the whole fight, they should not move between platforms. If you have more than 6 rogues, with the way this strategy is set up, it can be very dangerous due to Skeram's arcane explosion. At the very least, have them apply mind numbing poison to one of their weapons, and be ready to kick at all times as soon as they see him casting arcane explosion.

Healers: There should be three groups made up of Tank, Tank, Priest, Druid, Shaman/Paladin. This allows the healers to take a position relative to the tank that allows them to always be ready to heal the tanks in their group. All healers that are not in one of these 3 groups should be spread out, ready to spot heal when needed.

Other ranged dps: Warlocks, hunters, etc should be split up on the staircases as well, even positioned above the middle platform where they could shoot down on the platform while still being able to move to another location quickly when he blinks.

Example fight: Ready check (trash respawns fast, AFKs could mean a wipe); everyone mounts on a Qiraji Battletank if available; Skeram is engaged regularly, MT1 moves into position and begins tanking while the rest of the raid takes their position. After 30 seconds or so, Skeram blinks to the left platform, MT3 taunts and begins building aggro regularly. At this point, MT4 is only autoattacking, not sundering or taunting at all. Later into the fight, when he hits 75%, The three images split up and MT1, MT3, and MT5 taunt their images immediately, MT2, MT4, and MT6 begin autoattacking. MT5 calls out that he noticed his Skeram image taking more damage than normal, he calls that out, raid leader calls DPS on the right platform. Before that image is killed, it blinks to the middle, on top of the image that was already there. This is where MT2 comes in, he taunts the image that just blinked and begins moving it back to the right-side platform, where MT5 will taunt it and MT2 will move back to his position in the middle. Repeat this throughout the fight and it should be kept under control, and you'll get a nice, clean kill. Good luck everyone!

This encounter can be tricky for casters, as Skeram blocks all non-instant spells with his Earth Shock ability. The key is to keep up any defensive barriers while spamming any instant-cast offensive spells. Warlocks can let their Voidwalkers or Felguards tank Skeram while they keep their distance (though they need to be careful not to draw aggro onto themselves) but there is the risk that Skeram will Mind Control the player character to attack his pet until it is dead, then the encounter will end with Skeram and the Mind Controlled-warlock returning to the starting point until the spell runs out, at which point Skeram will immediately restart the encounter at full strength. The same applies to all other pet-using classes, including mages' Mirror Images. If you are unable to straight-up DPS the real Skeram down without taking out the copies, then take out the copies when they appear as they can overwhelm you. Remember, while Skeram and his copies only do about 1-2,000 damage per hit individually, this quickly adds up when you have the boss and up to six adds hitting you at once. Just remain calm and be patient, and you should prevail.

Aggro
Are you so eager to die? I will be happy to accommodate you...

Killing a player
Let your death serve as an example!

Death
You only delay... The inevitable... 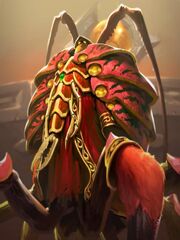 A "Skeram Cultist" in Hearthstone.