For other uses, see Reckoning (disambiguation).

[Gloves of the Servant],

[Gauntlets of the Windreacher], or

The Reckoning is part of the Sons of Hodir quest chain.

Meet Thorim near the Temple of Wisdom. Report the outcome of the fight to Jokkum in Dun Niffelem.

Loken killed my wife, turned my followers and me against each other. He took away everything I had, but today... that changes.

Meet me on the bridge near the Temple of Wisdom, just southwest of Ulduar. I will finish this one way or the other.

I need you there as a witness. You will not aid me -- this is personal.

After it's done, send word to Jokkum, King of the Frost Giants. He's a good friend and will know what to do.

No one can defeat Thorim in single combat. Not a giant, nor a beast... no one! Especially not that coward of a brother of his.

On my forefather's names, this I swear...

Loken will pay for this! 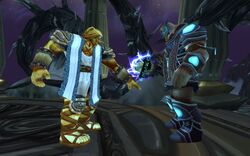 The Temple of Wisdom is just south of Ulduar, north of the mainland. Thorim is standing on the bridge north of it at [35.9, 31.5]

I've hidden from my destiny long enough. What I must do has never been clearer.
Loken must be destroyed by my hand.

Thorim says: It is time I put an end to my brother's madness.
Thorim walks up and yells in Loken's face
Thorim yells: Loken!!
Thorim yells: Stand up and fight me, you worthless traitor!
Loken knocks Thorim away, then jumps up to him.
Loken says: You seem eager to join your beloved Sif, brother.
Thorim unleashes a flurry of attacks, knocking Loken back towards the center of the temple
Thorim says: Do not dare...
Thorim says: Speak...
Thorim says: Her name!!
Loken yells: ENOUGH!
Loken says: Looks like you can still best me in a fair fight, little brother.
Loken says: Unfortunately for you.... this fight is anything but fair!
Loken incapacitates Thorim with a beam of some sort, trapping him in a tentacle-shaped form, and summons two Runeforged Servants. 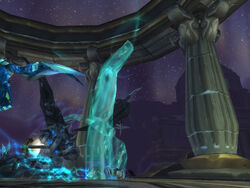 Loken says: Thanks to your little friend, you've left the Temple of Storms, where you were at your strongest. Instead we fight closer to my master's power.
Loken says: Minions! Take my brother and his drake to their new dwellings. Make sure the beast makes it alive. I have special plans for the broodmother.
Loken says: As for your life, mortal. I will be generous. After all... why would I destroy my most useful servant? I waited for you for weeks inside that Hyldnir mine.
Loken says: The shape wasn't mine, of course. And had you not been so reckless, you would've seen past my illusion. But you came through for me, and for that... I must thank you!
Loken, Thorim and the remainder of the NPCs teleport away.