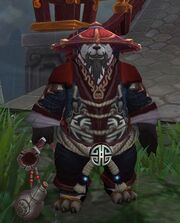 A Keg of Metal Brew

You want to stop the bell? We need the mallet first.

You want the mallet? We need to be friends first.

You want to be friends? We need a Metal brew first.

You want a Metal brew? You need to go to the Shrine of Fellowship first.

You want to go to the Shrine of Fellowship? Great! It's in the Jade Forest southeast of the Tian Monastery.

Ring the gong and get the Monkey King some brew while there. Oh... you may have to fight for it.

You have the Metal Brew?

The Metal Brew is strong and lasting, a brew to be shared with friends after a battle.

Emperor Shaohao and his Monkey King had many a round in our day. Many battles, and many good friends.

[90] The Third Riddle: Strength before heading out. Speak with Anduin for a reminder:

I will try to lead the "King" back to Lion's Landing and see if I can't persuade him to volunteer the information we need. In the meantime, I would say try to solve his riddles and meet us there.

The Temple of the White Tiger, location of the third riddle, is closest, so head there first. Exit the Tomb of Conquerors and fly southeast to reach the tiger temple. Fly to the main building and stop at the entrance. Immediately inside, at [68.7, 45.5]

is a ramp leading down to the right. Inside is... The Monkey King? Speak with him:

Ha! Didn't expect to see me here did you? The Monkey King does not delegate duelery! Now, are you hero? Or are you wikket?

I challenge you.
The Monkey King says: Okee dokee! Let's see what you got.

The Monkey King here is a boss-level hozen with 787,882 health. Finish him off:

Jade Forest is next closest, so head east in that direction. The Shrine of Fellowship is in northwestern Jade Forest, between Honeydew Village, Grookin Hill, and the Tian Monastery. There at the shrine at [33.4, 34.2]

is a huge bell and a small mallet resting on its northern support. Interact with it to ring the bell, summoning Sam the Wise:

Interact with the Keg and collect some of

[The Metal Brew]. Finally, head southwest to Dread Wastes. It may be quicker to run by Lion's Landing, turn in, and then take the portal to the Skyfire to cut off some travel time. Just north of the main scorpid camp on the Chittering Coast just inside the wall at [65.7, 71.7]

is a piece of

Head back to Lion's Landing once all three riddles are solved.