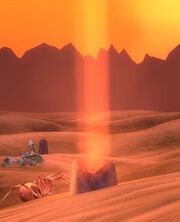 A Silithyst Mound dropped by a player

The Silithyst Must Flow is the name of the world PvP event in Silithus, where players of both factions must try and secure as much

[Silithyst] as possible. Silithyst is a red crystalline dust that reaches the surface through geysers exclusive to the Silithus desert. Both the Alliance and the Horde have taken an interest in this new substance, and researchers on both sides have discovered unique and valuable properties in the dust. The Horde and Alliance camps in the region have both been outfitted with turn-in stations where players can unload the Silithyst they collect.

To pick up Silithyst, locate a geyser and pick it up. The geyser will despawn, and the player will be carrying the Silithyst. While carrying it, your movement speed is reduced (abilities like "

[Sprint]" will not have any effect) and you will be unable to mount without dropping the Silithyst. The other way of getting Silithyst is locating a player of the opposing faction carrying some. Upon damaging that player, he will drop his/her Silithyst, creating a Silithyst Mound allowing any player to temporarily pick up the Silithyst.

After collecting Silithyst, the player should run to the faction's turn in point, displayed on the map. A player may only carry one Silithyst at any time, so after each pickup, you will have to run and turn it in. The first faction to collect 200 Silithyst wins the race.

A single turn in of Silithyst awards the player with the following:

In addition, the faction that completes the race to 200 Silithyst will receive a zone-wide buff, increasing Cenarion Circle reputation gained from killing monsters by 25%. The buff will apply to any player within Silithus and the Ahn'Qiraj instances, even to those who enter them at a later time. It will persist through death until the opposing faction has collected 200 Silithyst and therefore won the race. A server reboot will reset the battle, which means both sides start at 0/200 Silithyst and lose their buff.

This buff is most useful in instances because of the greater amount of reputation collected from each kill. Although non-instance kills only grant 2 points of reputation (10 points as of Patch 3.0.2), while the buff is in effect, every fourth kill will reward 4 reputation points (15 as of patch 3.0.2). This, of course, is not a large bonus, but it is still slightly faster than non-buffed reputation farming.

Unfortunately, many may find that the honor and reputation bonus are not enough to reward their efforts. The reputation and honor given are both too low to make a day of Silithyst collecting worthwhile compared to the rewards given through the battlegrounds or the various methods of Cenarion Circle reputation farming. As a result, there will rarely be many people collecting any Silithyst.