The Spirits of Ashenvale (WC3 Orc)

The Spirits of Ashenvale is Chapter 4 of the orc campaign, The Invasion of Kalimdor.

Two days later, along the borderlands of Ashenvale forest... 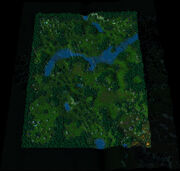 Before Thrall's vision of a new Orc settlement can be attained, a massive amount of lumber must be harvested. Luckily, the dense, lush forests of Ashenvale will prove to be an abundant source of lumber.

The enormous, enchanted Trees of Life will provide your forces with vast amounts of high quality lumber. You must seek out the sacred Trees and rip them down! Be wary, though. The warrior women who protect the forests are sure to take offense at the despoiling of their land.

A nearby tribe of Furbolgs has begun to harass the Goblin Merchant and is scaring away potential customers. If you can slay the beasts' chieftain, the tribe may disperse and improve the Goblin town's commercial viability.

Grom oversees the Warsong base, where Peons are busy chopping lumber. Meanwhile, cloaked figures watch them from the shadows.

Grom Hellscream: Damn Thrall for sending us away! He chooses to use his greatest warriors for manual labor? He'll be lost without me.

Warsong Orc: Chieftain, there's something strange about these woods. It's too... quiet. Almost like we're being watched.

Grom Hellscream: Are you all afraid of spirits now? There is nothing here but ancient trees and shadow.
Suddenly, voices are heard coming from the trees in a language the orcs aren't used to hearing.

Warsong Orc: You hear that? This place is haunted! I fear no living enemy, but my axe cannot cleave fleshless spirits!

Grom Hellscream: Still your tongue and get to work! The warchief's new settlement will require a great deal of lumber. This section of forest must be cleared!

Huntress: You were right, sisters. These green-skinned brutes have no respect for life! Slay them in Elune's name!

Grom Hellscream: Yes. They almost look like elves, but they're far too tall, and far too savage.

Grom Hellscream: Those dancing lights are strange. Perhaps they are the dread spirits that you've all been so afraid of?

Grom Hellscream: They won't last long after our wolf riders have ensnared them!

Warsong Orc: Chieftain, that great tree pulses with magic! We should keep our distance!

Grom Hellscream: Bah. Am I surrounded only by cowards? It's a tree, like any other! Cut it down!

Grom Hellscream: You see? The great tree provided us with an abundance of lumber! If we find any more, then we'll hack them apart as well.

Neeloc Greedyfingers: Ah, greetings, good orc. Strange to see one of you in these parts.

Grom Hellscream: We are here to cut lumber, little goblin.

Neeloc Greedyfingers: Hmm. Well, there's this tribe of bear men, called furbogs, in this region that's been giving us trouble. If you kill the chieftain, we'll sell our goods to you at cost. We might even let you borrow a few shredders!

Grom Hellscream: They must be the furbolgs the goblin spoke of. This will be a worthy battle.

Neeloc Greedyfingers: Ah, thank you! Now, these shredders will cut through those trees in no time!

It details the events in which Grom Hellscream grudgingly enters Ashenvale Forest on orders from Thrall to harvest lumber and build a settlement for the Horde. Grom and his forces are met by "warrior women" who are later known as night elf sentinels. As the night elves relentlessly fight back the orcs, they watch as Hellscream's forces desecrate their sacred woodlands and hack apart Trees of Life and other ancients for lumber. The night elves retreat deeper into Ashenvale as the Warsong clan begins constructing a settlement.