The Staff of Storm's Fury 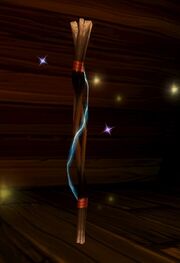 The Staff of Storm's Fury is an artifact looted from the grave of Rodin the Reckless at Shield Hill. Rodin's ghost now haunts the site, seeking revenge and calling curses upon the thieves (and pretty much everyone else around).

The Northsea Freebooters looted the staff and got as far as Iskaal (in Howling Fjord) before abandoning the ship, leaving a lone madman, Abdul the Insane aboard.

This item is an objective of

When returning the staff to the grave, Rodin says:

From the mist and fog the Kvaldir approach. Flee while you still breathe the air of the living...