Return to the safety of the other shaman if Iso'rath's defenses are eating away at you.

We need you! You were stuck in some kind of nightmare. So are many of the other shaman.

It doesn't matter... our plan is falling apart. Some of our shaman are channeling protective auras that should combat the digestive juices and keep you alive, but we need you to rescue the other shaman from the tentacles. We won't be able to defeat Iso'rath without them!

Don't stay out in the stomach without the other shaman for too long or you'll be digested alive!

The battle is not over. The shaman within Iso'rath need you!

United with the Earthen Ring, we can survive the horrors of Iso'rath. Now it is time to turn our vengeance upon him!

This quest automatically accepts. A new bar appears near the bottom of the screen, slowly filling from left to right. This reflects the state of Digestive Corrosion: Being slowly digested by Iso'rath. Damage increases as the meter increases.

The only way players can decrease the meter is by getting inside one of the healing bubbles, which also restore 4412 health a second. Circle around the interior counterclockwise and kill the tentacles to free the other shaman, who will join the player. Start with the non-elite tentacle just to the player's northeast: A level 84 tentacle with 128k health, holding Stormcaller Jalara:

Head north to the next tentacle, a level 84 tentacle with 128k health, holding Earthmender Duarn:

Keep circling to the northwest to a level 84 elite tentacle with 257k health, holding Hargoth Dimblaze:

Finally, keep circling to the southwest to deal with a level 84 elite tentacle with 515k health, holding Stormcaller Mylra: 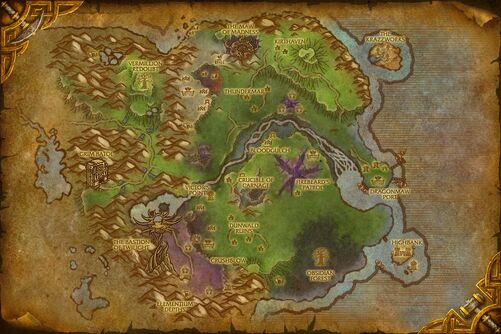