The Tomb of Sargeras trailer 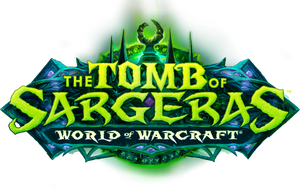 The Tomb of Sargeras trailer is the official trailer for World of Warcraft Patch 7.2: The Tomb of Sargeras. The trailer shows Archmage Khadgar, the Prophet Velen, and the Armies of Legionfall plotting to deal with the rest of the Burning Legion's forces, as well as Kil'jaeden expressing his doubt to Sargeras concerning the Legion's victory.

It also plays as an in-game cinematic upon accepting

Archmage Khadgar: Champions, your victory at the Nighthold has granted us the key to ending this war.
Archmage Khadgar, the Prophet Velen, and representatives of the Class Orders are gathered in Dalaran, discussing the success of their recent efforts on the Broken Isles.

Archmage Khadgar: With the Pillars of Creation assembled, we finally have the power to cut the demons off from our world. Gul'dan failed, and so shall the Legion!
The Class Orders begin to cheer, but Velen stamps his staff into the ground, drawing everyone's attention.

Prophet Velen: Gul'dan... was merely their pawn. Until victory is assured, we must remain vigilant; for the Legion's true masters have yet to reveal themselves.
Kil'jaeden is shown to be spectating the entire meeting in secret via a holographic display aboard his command ship in the Twisting Nether, displeased by what he sees.

Prophet Velen: Among them... a monster who hunted my people across the stars: Kil'jaeden.
Kil'jaeden angrily swipes away the image of Velen at being called a monster.

Kil'jaeden: The day I took the felfire into my veins, I saw my destiny: a grand crusade that would reach the ends of creation. That was the vision you showed me.
Kil'jaeden turns to address a swirling vortex of felfire, from which Sargeras responds.

Sargeras: Our crusade will prevail.

Kil'jaeden: Everything we have done has been by your design... and all we have to show for it is failure.

Sargeras: Perhaps you've lost sight of our destiny. Perhaps I overestimated your resolve.

Kil'jaeden: I paid for that destiny... with my WORLD!
Kil'jaeden gestures towards Argus, the planet having been completely transformed by fel corruption.

Kil'jaeden: The time has come to see it done.
Kil'jaeden dismisses the voice of Sargeras, channeling power from the pool of fel before him. On Azeroth, dozens of Legion ships begin to teleport in over the Tomb of Sargeras, ready to assault Dalaran as Khadgar and Velen look on in horror. Kil'jaeden spectates via another holographic display.