The War Effort is a short story featured on the official site telling the efforts of a dwarven fisherman to get supplies for the War Effort.

With a whoop, Saegan yanked on his fishing rod. The fish went sailing over his head, scales glittering in the afternoon sun, and landed neatly on the huge piscine pile behind him. Whistling through his beard, the dwarf ambled over to his catch, removed the hook, and tied the net around the lot. With calloused, experienced hands, he broke down his pole and line, placing it back in his pack with care. Saegan then swung the full net over his shoulder and limped his way down the dock.

The Menethil gryphon master frowned dubiously at the load on his back as he approached. The gryphons themselves, however, perked up at the smell of fresh fish so close. Saegan smiled and winked. "I'll give a tip to th' gryphon that flies me back home to Ironforge an' keeps this cargo safe." Within minutes he was in the saddle, soaring above the mountains, with a content gryphon clutching the net in its claws.

The fisherman looked down upon Dun Morogh as it came into view. Armies were practicing and mobilizing. Adventurers and scouts left the city via gryphon or mount, riding hard to get to their destination. All around, the tension of impending war grew in the air. As Saegan's gryphon flew through the gate of Ironforge and into the city, the usual bustling sound assaulted his ears, but with an edge. The clangs from the forge were nearly overpowering. The sharp orders of military groups moving out were unmistakable. Ironforge was the center of the Alliance world as it prepared for war.

He dismounted as soon as he landed and gave the fleet gryphon one last fish from his haul. "No more now," he chuckled as the greedy creature clacked its beak toward his net, "this is for th' war." Hefting the load once more, Saegan limped around the Great Forge toward the Bronze Kettle. As he did, he glanced over to the anvil with his good eye. Smiths of all races and creeds toiled over their creations, working as fast as they dared to supply the war effort. He shook his grizzled head as he entered his destination.

Daryl looked up and grinned as Saegan threw the pile of fish on the table. "Some haul," he remarked. "Throwin' a party?"

"You know I'm not," Saegan replied. "Help me clean and gut this lot. I would have done it there, but Menethil's just a hop over the mountains, and besides, I needed a bit of company." He took out a knife and grabbed one of the fish, starting on the business. 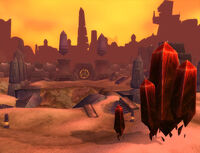 For hours, as they prepared and cooked the fish, they spoke about the latest developments. The silithid threat was growing greater with each passing day. Strong adventurers sought the answer to the riddle surrounding the Scarab Gate. The young and the crippled, however, were not idle in the war effort. Supplies were needed on the front lines in Kalimdor: food, metals, herbs, all manner of materials. Orders came in every day, calling for more to be sent across the ocean. Saegan wasn't young, not by any stretch of the imagination; his leg had been badly broken in a skirmish with Tauren some years ago, and he could no longer keep up with the younger, stronger fighters. With reluctance, he'd retired his sword and began fishing in order to supply the fighters with food every night. It wasn't precisely a glorious job, but a necessary one.

At last the rations were made and packed. Daryl helped Saegan wrap and pack them in a crate. "Sure you don't need any help, there, lad?" Daryl asked as the fisherman limped out the door.

"Nah," Saegan called over his shoulder. "I have to do somethin' to help against those damned bugs; this much, at least, I can do on my own." Hefting the fragrant crate, the dwarf slowly made his way to the Military Ward; Huntress Swiftriver would have plenty of food to provide for the soldiers today.