The Cenarion Circle is the primary druidic organization on Azeroth. 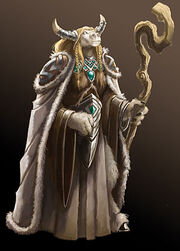 Druids live in a state of unparalleled union with nature. Tightly bound to the plant and animal kingdoms, they are natural shapeshifters, and so they know firsthand the abuse that is sometimes visited upon their wild brethren. In consequence, druids tend to be wary and reclusive; few outsiders have learned anything of their ways. Few druids have risen to prominence in the public eye. Indeed, druids usually settle in locations far from "civilized" lands and further their goals in subtle ways.

Until the end of the Third War, all druids in the Cenarion Circle were men, and almost all were night elves. Women druids and druids from other races are not necessarily a recent development, but until the war, such druids were relatively rare and often had no affiliation with the Cenarion Circle.

Due to the war's heavy casualties, though, the Cenarion Circle has set aside its historical strictures on membership. Thus, most druids today remain night elf men, but the druids have also welcomed women into their ranks. In addition, other races--most notably the tauren--have been permitted to join the Cenarion Circle. Even druids who might otherwise be at war with one another will set aside their disputes in order to work together for the betterment of nature.

The first mortal druid on Azeroth was Malfurion Stormrage, who was trained in the druidic arts by the forest demigod Cenarius. After the Great Sundering, further night elves chose to follow in Malfurion's footsteps, and he gladly taught them what he knew. They made this choice out of reverence for nature and a desire to learn. Impressed by Malfurion's knowledge and conduct, the green Dragon Aspect, Ysera, saw the worth and potential of races other than dragons. She invited the druids to visit her realm, the Emerald Dream.

Malfurion's exceptional abilities and intuitive grasp of druidic magic made him the unquestioned leader of the Cenarion Circle. However, Malfurion has recently fallen into a mysterious coma, and so the leadership has fallen to Fandral Staghelm. Malfurion, Fandral, and Hamuul Runetotem all carry the rank of archdruid.

To some extent druidism was spread by the night elves, but other races have also made spontaneous discoveries of various druidic tenets. Unfortunately for historians and scholars, further specifics about the dissemination of druidism have not yet been discovered. Druids have little interest in discussing the details of their history with outsiders. Attempts to infiltrate the druids and acquire such knowledge have been met with complete failure: it would seem that deception is of little use against druids.

What is known is that the Cenarion Circle is a small organization that answers only to itself. Although they are highly respected by most mortal societies, druids have nothing to do with creating or enforcing law. The Cenarion Circle has more far-reaching concerns than the politics of any particular government.

A druid's primary care is to protect and preserve the world. Druids have a deep understanding of how all living things interact with and rely upon one another. By promoting a greater awareness of this interdependency, druids hope to convince others to lead lives that are more in harmony with the natural environment.

Trained to see truths beyond the physical reality, all druids once spent part of their time monitoring the Emerald Dream, where they restored and protected the planet's health, and eliminated sources of illness, corruption, or exploitation. Many druids have hibernated occasionally so that they can better embrace the Emerald Dream and learn more about the environment. A druid never stops learning: even the smallest blade of grass has many lessons to teach.

Unfortunately Nordrassil has been in poor health since the Third War, which culminated in the Battle of Mount Hyjal. Although the pact between the green dragonflight and the druids is still in place, Nordrassil's poor health has made reaching the Dream a much more difficult prospect than it was. Even so, there may be many druids visiting the Dream, particularly those with great skill and wisdom.