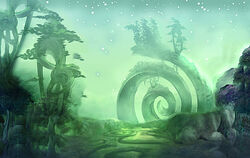 Also known as: the Dream, the Dream of Creation

The benevolent titans created the Emerald Dream to serve as the underlying blueprint for the planet Azeroth. Located outside the physical boundaries of Azeroth, the Dream is a lush and primal forest: the world that Azeroth might have become, had it developed without interference from the sentient races (e.g., technological advances, urbanization, and wars). Although the Dream is beautiful, its primal savagery can also be deadly.

The Dream is under the protection of the green Dragon Aspect, Ysera. After the titans had shaped Azeroth, they sent Ysera into an eternal trance and charged her with watching over all of Azeroth from the Dream. As a result, green dragons guard every portal into the Dream, and they always see both the landscape of Azeroth and the corresponding dreamscape. This enchanted vision, known as dreamsight, allows green dragons to perceive their surroundings with perfect clarity despite the dragons' closed eyes.

Unlike Azeroth, the Emerald Dream is a realm that is primarily spiritual instead of physical. All who enter the Dream can affect it to a minor extent, but only temporarily: the underlying structure of the Dream inevitably reasserts itself. Even Ysera cannot change the Dream permanently, nor, indeed, would she wish to do so. She does not control the Dream; on the contrary, it is closer to the truth to say that the Dream controls her. Using the Dream as her unfaltering guide, she regulates the ebb and flow of nature and the evolutionary path of the world itself.

Perception of the Self Inside the Dream

The creatures of Azeroth can visit the Emerald Dream either physically or via dreams, as the realm's name indicates. When an individual's spirit visits the Dream, leaving the body behind, that individual will manifest his or her dreamform, which normally looks and behaves much as that individual's physical body might. Hence, for most creatures, moving through the Dream is achieved in the normal fashion, despite the realm's chiefly spiritual character.

These rules do not apply to druids of sufficient skill or experience, who are trained to see beyond physical reality. These druids might be capable of abnormal movement in the Dream (e.g., a night elf who can sprint at a greatly accelerated rate, walk through solid objects, or fly). It is quite rare to see such unusual capabilities in non-druids, but it is not beyond the realm of possibility.

Characteristics of the Dream

The Dream can be affected by all dreamers to a minor and temporary extent. However, no living creature except the titans has ever been able to permanently change the Dream. Ysera herself cannot control or shape the Dream, which has its own ecology and a variety of inhabitants, both sentient and non-sentient.

Time is meaningless inside the Dream. As a result, the green dragonflight, which spends the majority of its time in the Dream, is extremely long-lived. Ysera's consorts in particular almost never emerge from the Dream and are effectively immortal, as are all other permanent denizens in the Dream.

Because the titans invested a great deal of work in perfecting their design of Azeroth, the Emerald Dream is not one a single perfect vision of what Azeroth would become. The finished design of the planet was the product of many previous flawed or unfinished models. The Dream therefore has multiple layers, one for each of these earlier incarnations. These older layers of the Dream are often incomplete and therefore limited in scope, relative to the finalized Dream.

After the War of the Ancients, three of the Dragon Aspects grew a World Tree, Nordrassil, atop the new Well of Eternity, and Ysera linked Nordrassil to the Emerald Dream. Her action was primarily meant to prevent abuse of the Well and to keep the Well's powers from growing. The tempering energies of the Dream act as a calming influence on the Well's chaotic energies. Secondarily, Nordrassil's connection to the Emerald Dream allowed the druids of Azeroth to travel easily to the Dream.

Since that time, all druids have periodically hibernated while their spirits wandered the dreamways. This hibernation is not some sort of physical requirement for druids, though; rather, the hibernation was a communion with the Emerald Dream. The druids were learning more about the natural world through the Dream. There was always something new for the druids to learn, even in the smallest blade of grass.

During the Third War, the druids empowered Nordrassil with the night elves' immortality and the energies of countless night elf spirits. Nordrassil then gave off a blast of energy that killed the demon lord Archimonde, ending the war and sealing the Burning Legion's defeat on Azeroth. Although Nordrassil was not killed in the process, the night elves' noble sacrifice left them mortal and cost the druids their easily accessible link to the Emerald Dream. Thus, reaching the Dream has become a significantly more difficult prospect, and fewer druids are able to walk the Dream today.

Certain that the night elves' immortality could be restored, Archdruid Fandral Staghelm proposed growing a second World Tree, though the dragons showed no sign of offering their assistance in the process. Archdruid Malfurion Stormrage flatly refused; he argued that without the blessing of the dragonflights, the tree would be an abomination.

When Malfurion fell into a mysterious coma, Fandral became the new leader of the druids. His first act was to persuade the rest of the Cenarion Circle to grow the second World Tree, which they named Teldrassil. Teldrassil is not linked to the Dream or to the Well of Eternity. Contrary to Fandral's hopes, the new World Tree has not restored the night elves' immortality.

Something terrible has entered the Dream: the Emerald Nightmare. Four green dragons, once the proud lieutenants of Ysera, have gone insane, and their noble forms have been warped almost beyond recognition. The powers these ghastly dragons wield are twisted and evil mockeries of their former abilities. Worse yet, these dragons seem to be taking out their rage and frustration on the creatures of Azeroth.

Thus far, neither the druids nor the dragons have been able to discover the Nightmare's origin. Only one thing is clear: as long as the Nightmare continues to darken the Emerald Dream, corrupted green dragons will sew terror and madness throughout the world.

The information could still retrieved from http://www.wow-europe.com/en/info/encyclopedia/394.xml.