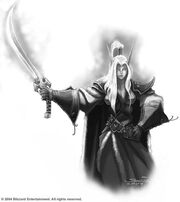 Long ago, one caste of night elf nobility rose to prominence and eventually became known as the Highborne. Their reckless use of magic in the royal palace of Zin-Azshari caught the attention of Sargeras, who easily corrupted them. Captivated by the powerful dark titan, the palace Highborne helped the Burning Legion invade Azeroth. Countless night elves and other creatures died during the resulting War of the Ancients.

A number of Highborne living in the palace regretted their choice to aid the Legion and, led by Dath'Remar Sunstrider, managed to escape Zin-Azshari before the Sundering occurred. Afterwards, tensions between the escapees and other night elves came to a boiling point when Dath'Remar and his followers refused to renounce arcane magic. They were certain that arcane magic could be used safely, and they felt that the rest of the night elves had neither the right nor the knowledge to claim otherwise. Sentenced to exile, these Highborne were more than happy to journey over the sea to Lordaeron, where they hoped to establish a home of their own.

The Founding of Quel'Thalas

Gradually the exiled Highborne developed striking differences from the night elves. Cut off from the new Well of Eternity, they diminished in height, and their skin lost its characteristic violet hue. In addition, the elves lost their resistance to injury and illness, and they became mortal. Many of the elves died from exposure or starvation during their long journey. In addition to these hardships, the elves were forced to flee the site of their first settlement, Tirisfal Glades, due to a mysterious evil influence that drove many of their number mad.

As they pressed further inland, the elves developed a blood feud with the cunning forest trolls of Zul'Aman, who controlled most of the northern reaches of Lordaeron. Finally the exiled elves reached a region whose forestland reminded them of their distant homeland in Kalimdor. They drove out the resident Amani trolls, founded the kingdom of Quel'Thalas, and began calling themselves high elves. They also crowned Dath'Remar as their first monarch.

In spite of the hardship they had endured, the high elves remained determined to continue their spellcasting, for they had come to consider arcane power their birthright. Using a vial of sacred water stolen from the first Well of Eternity, they created a fount of mystical power at a convergence of powerful ley energies in Quel'Thalas. They named this fountain the Sunwell. Although it was weaker by far than the first Well of Eternity, the Sunwell's potent arcane magic fed and strengthened the high elves.

Thus, the city of Silvermoon was established. The power of the high elves grew, and they cast an enchantment on the forest that would keep them bathed in eternal springtime. From that day forward, all high elves were constantly suffused in the Sunwell's energies, and the elves came to regard the Sunwell's waters as holy. Although most high elves were not spellcasters, all high elves had access to the fountain's power no matter where they located on Azeroth.

Elven magi crafted monolithic Runestones along the borders of Quel'Thalas; these massive stones powered a magical shield intended to mask the elves' magic from extra-dimensional threats and protect the land from invasion. The hard-won peace of Quel'Thalas would endure for roughly four thousand years.

The Troll Wars: the Defense of Quel'Thalas

The high elves soon learned that the trolls were not so easily defeated. After all, forest trolls had controlled much of Lordaeron for several millennia before the high elves even arrived on the continent. Almost immediately after the high elves founded Quel'Thalas, the trolls began to attack the elven settlements en masse. The stubborn elves, unwilling to give up their new land, fought hard and finally defeated the trolls.

Peace followed and lasted for several thousand years. Then a mighty army of forest trolls besieged Quel'Thalas. The trolls had regrouped, and they meant to obliterate the elven interlopers. The high elves were hopelessly outnumbered.

Driven to desperate measures, King Anasterian Sunstrider appealed to the human nation of Arathor. The high elves offered to teach select humans how to use magic if the humans would use their new powers to help defend Quel'Thalas. Arathor's monarch, King Thoradin, distrusted magic, but the high elves reminded him that if Quel'Thalas fell, the southlands would be the next area to fall before the trolls.

Thoradin reluctantly conceded that the high elves had a point. He agreed to their offer, and soon his armies had joined the war. The united elf and human forces won out over the trolls. History would never see the trolls rise as one nation again. Assured that Quel'Thalas was saved from destruction, the elves made a pledge of loyalty and friendship to the nation of Arathor and to the bloodline of its king. As a result of the alliance between Arathor and Quel'Thalas, the wizard nation of Dalaran was formed, where humans and elves would study magic for years to come.

The Second War: Alliance and Secession

When the Second War broke out, the high elves had little interest in the conflict, but they felt duty-bound to lend the Alliance of Lordaeron their support. In particular, the commander of the Alliance forces was Lord Anduin Lothar, who was the last descendent of King Thoradin. Lothar's family had aided the high elves in fighting the Troll Wars, and so King Anasterian reluctantly agreed to provide a small number of soldiers and spellcasters who would fight alongside the Alliance.

Then the Horde recruited Amani trolls into its ranks. Shortly thereafter, the Horde burned down the borderlands of Quel'Thalas and slaughtered many high elf civilians. Furious at this wanton destruction of life, the elves officially joined the Alliance and committed all their resources to the war.

By the time the Horde was driven back, however, the orcs and trolls had already achieved their true goal: to steal and desecrate many of the Runestones that powered the elves' defensive shield. The warlock Gul'dan then used the pilfered stones to power his devious Altars of Storms.

Nevertheless, the Alliance ultimately won the Second War, and most of the vanquished orcs were rounded up and put into internment camps. In the war's aftermath, the cost of rebuilding was significant, particularly when added to the cost of maintaining the internment camps. Without a common enemy, the human nations began bickering over territorial claims. The high elves began to doubt the value of the Alliance. Humanity seemed to need the high elves, but had little to offer in return, especially now that many Alliance resources went toward maintaining the internment camps.

At last Anasterian rescinded the high elves' allegiance to the Alliance. He stated that the humans' poor leadership had been directly responsible for the burned forests in the borderlands of Quel'Thalas. King Terenas Menethil argued that nothing of Quel'Thalas would have survived if not for the hundreds of valiant humans who gave their lives to defend it. Despite his attempts at reestablishing diplomatic relations, however, the elves opted to remain independent of the crumbling Alliance. Their departure triggered the additional secession of the Gilneas and Stromgarde nations.

The Third War: Loss of the Sunwell

During the Third War, Prince Arthas Menethil and the Scourge laid waste to Quel'Thalas, wiping out most of its population and reducing large tracts of the mighty kingdom to ash in his quest to reach the Sunwell. Yet not all who fell before Arthas stayed dead: the merciless prince raised Quel'Thalas' foremost defender, Ranger-General Sylvanas Windrunner, into undeath against her will to serve the Scourge as a powerful, tormented banshee.

As the undead armies closed in on the Sunwell, a high elf named Dar'Khan Drathir aided Arthas by lowering the shields surrounding the Sunwell. In betraying the high elves, Dar'Khan hoped to gain the favor of the Lich King. However, the most immediate result of his treachery was an explosion that knocked him unconscious and scattered most of the Sunwell's powers.

The wizard Borel sensed the mystical energy being unleashed and succeeded in trapping a portion of it inside an avatar disguised as a young human girl, Anveena. Unaware of Borel's deed, Arthas then used the remaining energies of the Sunwell to reanimate the spirit of Kel'Thuzad in the form of a nightmarish lich. The Sunwell was left defiled and drained of all its magic.

King Anasterian was slain in battle, and the sole heir to the throne, Prince Kael'thas Sunstrider, had been pursuing magical studies in Dalaran when the invasion occurred. In the absence of other leadership, Lor'themar Theron, Sylvanas Windrunner's second-in-command, assumed temporary leadership of the high elves.

The few high elves to survive the Scourge's invasion quickly grew ill and apathetic. It became clear that they had become addicted to the Sunwell's arcane energies. Being constantly suffused in magic had fundamentally changed their race. Now that the source of their magic was gone, they were suffering acute pangs of withdrawal.

Prince Kael'thas returned home and rallied all the survivors he could find: approximately 90% of the surviving high elves. He declared that these survivors would now bear a new name--the blood elves--in honor of their fallen people. The blood elves no longer consider themselves high elves, and they have different priorities and behaviors than their high elf kindred.

In consequence, there are so few high elves left on Azeroth today that they cannot be considered a race in anything other than the biological sense. High elves do not gather in any significant numbers, nor do they act as a coordinated whole. They are a very small group of individuals scattered all over the world. As such, they do not have common opinions or goals. Indeed, modern high elves cannot even truly be said to have a culture--only a past filled with glory and regret.

Like blood elves, high elves can use arcane magic, but most do not because most high elves are not spellcasters. Whether or not they are spellcasters, all high elves are suffering acute pangs of withdrawal in the absence of the Sunwell's energies. A few high elves here and there have realized the cause of their distress; others have not. A crucial difference between high elves and blood elves is that no high elves have decided to feed their hunger for arcane magic by draining that magic from alternative sources (now that the Sunwell is useless). Even today, though, a high elf might still succumb to that addiction and become one of the blood elves.

A Struggle to Survive

On several occasions after the Sunwell's defilement, Kael'thas publicly asserted that his people would die unless they found a new source of magic. Technically the prince was mistaken. According to Azeroth's top priests and medics, the only high elves to perish due to magical withdrawal have been the very old, the very young, and elves who were already in poor health.

Such a low rate of attrition might be considered an argument in favor of simply forgoing magic and suffering through the consequences. Indeed, a few high elves are said to have succeeded in taking this route through sheer willpower: they survived the process, however unpleasant. Apparently certain magical artifacts also ameliorate the symptoms of withdrawal and might, if sufficiently powerful, be able to suppress them altogether.

This is not to say, however, that withdrawal from magic would leave the high elves unharmed. On the contrary, permanent mental or physical damage is possible.