The Wrath of the Lich King Bestiary

Here there be dragons...

Wrath of the Lich King will introduce a vast new land and many new dungeons to the game. A multitude of strange and terrifying creatures inhabit the frozen continent of Northrend. This page contains a few of the many new monsters players will encounter as they venture deep into the forgotten lands and desolate wastes of the Lich King's domain.

The half-spider, half-humanoid viziers once served as advisors, sorcerers, and seers to the mighty nerubian spiderlords. But in the aftermath of the War of the Spider, the tables turned, and in the vacuum of their collapsed society, the cunning viziers rose to power. Utilizing their sorcery and high intelligence, the viziers have emerged as the rulers of the nerubians' underground kingdom.

It is rumored that the viziers themselves may serve an unseen emperor, one who is destined to lead the ancient spider-people to a final victory over the Scourge. While many can only speculate as to the existence of this nerubian emperor, some continue to investigate the link believed to exist between the nerubians and the vicious insect race known as the qiraji. 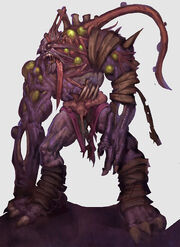 Plague eruptors are the latest experiment of the Lich King, designed to spread horror and chaos across the world of the living. These walking corpses have quickly earned a reputation as the most destructive of the Scourge army: hyper-violent, incredibly strong, and deceptively fast. The most terrifying weapons in the eruptors' arsenal are the myriad pulsing nodules that dominate their rotting skin. It is from these nodules that the undead plague festers and bursts, insuring that wherever the eruptors go, they quickly spread the Lich King's apocalyptic contagion.

The powerful and ferocious shoveltusk are easily identified by the massive curved antler which protrudes from their heads and the twin sloping tusks that extend from their jaw. The moose-like beasts use their tusks primarily to dig for food, whereas the antler makes for a fearsome ramming weapon in contests to establish dominance over other males.

The shoveltusk are territorial and will protect their feeding grounds with deadly force. Adventurers traveling in Northrend would be wise to avoid these cantankerous and unpredictable beasts. 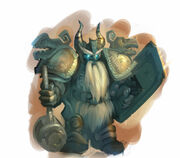 The Explorers' League has scoured the far corners of the world, seeking to uncover the truth behind the origins of the dwarves. Now it seems they may be one step closer to unlocking the secrets of the past.

The latest clues come from ancient dig sites within the Howling Fjord, where the iron dwarves were first encountered. Etched with runes of power - and with lightning pulsing beneath their thick, metallic skin - they may represent the missing link between the dwarves and the legendary titans of myth. Unfortunately the malevolent iron dwarves have openly defied the Explorers' League and seem intent on destroying any and all artifacts connecting them to the shadowed recesses of history.

Despite the absence of any records documenting the tuskarr's past, many significant facts have recently come to light. The tuskarr are a kind-natured nomadic race that roams the southern coastlines of Northrend, guided by the carved cyclopean statues that mark their seasonal fishing routes. The tuskarr's tribal affiliation is evidenced by the sigils inscribed on their tusks, and although they are a peaceful race, they are constantly beset by the kvaldir and an arctic race of murloc-like creatures known as the gorloc.

Yet even their enemies marvel at the tuskarr's prowess and fearlessness in catching some of the most dangerous creatures in Northrend's frigid waters, including whales and giant squid. Not even the unnamed leviathans that lurk in the ocean's depths are beyond the tuskarr's reach.

The tuskarr have seen their share of difficult times, but with the recent arrivals of the Alliance and Horde, they have found new allies in the ongoing struggle against the hostile forces of Northrend. 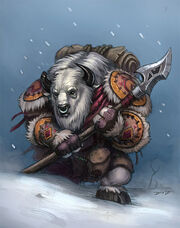 This tenacious, stoic race knows all too well the rigors of living in the harsh and often deadly wastes of Northrend. Over time, the taunka - whom many believe to be ancestral cousins of the tauren - have adapted, but only by forcing the land and the elements to yield to their will. The taunka's relationship with nature, unlike that of their tauren brethren, has been one of constant struggle and grim perseverance.

Although the taunka may seem dour or even cold to outsiders, those who come to know them will soon recognize an embattled race of survivors characterized by colossal hearts and unshakable resolve. 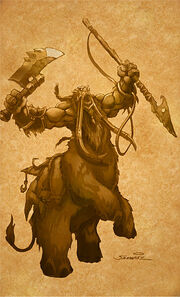 Magnataur have the torso of a giant attached to the body of a mammoth. This peculiar appearance has sparked speculation that their race might be related to centaur or even keepers of the grove. Many wonder if these races share a common ancestor, and some have even suggested Cenarius himself.

The notoriously long-lived magnataur are rumored to engage in cannibalism during times when food is scarce. Single males are known to control giant herds and produce sizable litters, but in the frigid, perilous wastes at the roof of the world, only the strongest and meanest survive.

Despite their hostility to most races, the magnataur have become tolerant of the arctic kobolds, who follow the herds for safety and mutual benefit during long hunts. Although the redoubtable magnataur lead solitary lives, adventurers who cross paths with them quickly learn that it would have been wiser to stay at a safe distance.

The fiercely aggressive jormungar are a marvel of evolution, possessing rows of chisel-like teeth capable of boring through solid rock, as well as muscular, flattened bodies well adapted to rapid underground navigation.

Legends tell of the nerubians' using the jormungar as creatures of labor, forcing them to carve massive tunnels through Northrend's subterranean ice and lay the groundwork for the nerubians' ancient civilization. With the fall of the nerubian empire, swarms of rogue jormungar ran amok, drilling through the region's permafrost, attacking surface dwellers, and devouring everything in their path.

The same dark sorcery used to command the Scourge's powerful abominations is utilized to even greater effect in the harsh and distant realm of Northrend. Here the Lich King has focused his malefic powers on flesh giants: nightmarish creatures that make abominations look tame by comparison. Scourge minions assemble flesh giants and abominations in a similar manner, piecing them together out of body parts from numerous corpses. Unlike abominations, though, the "spare parts" used to create flesh giants are harvested from multiple types of fearsome Northrend giants.

These living battering rams employ tremendous brute strength in carrying out the inexorable will of their loathsome master. Those who oppose the flesh giants take their lives into their own hands... and risk a fate even worse than death.

Though rarely seen, the wendigo's existence is evidenced by the fierce, primal roars that echo across Northrend's mist-shrouded peaks. Many believe these reclusive, cannibalistic creatures are the primordial cousins of the wendigo that populate the mountains of Dun Morogh.

The wendigo of Northrend dwell in bone-littered caves and venture out only to hunt. They are ferocious and aggressively defend their lairs, food supply, and young from any perceived threat. Adventurers who do not wish to be added to the wendigo's bone-mounds would be wise to run at the sound of their savage bellows.

The bestiary can still be viewed here through http://web.archive.org/. The images can be found here.