For the Alliance version of this scenario, see Theramore's Fall (Alliance). For the lore and event this scenario is based on, see Attack on Theramore Isle.

Theramore's Fall is a scenario in World of Warcraft: Mists of Pandaria.

At level 90, the scenario can be started via the Dungeon Finder.

Turn the tide of the failed assault on Theramore and claim her riches! For the Horde!

In the dead of night, as Theramore's defenders huddle within their walls, a small team of capable veterans infiltrates the island, making their way amongst the docked warships of the 7th Fleet.

Their mission: To throw the Alliance forces into chaos while the Warchief's army regroups. 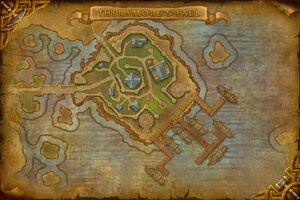 Stage 1 - To The Waterline!

Starting on The Sea Wolf, travel to each Alliance warship along the docks killing the Theramore guards and 7th fleet marines. Most of the captains of the warships: Captain Tellern, "Mad" Morden Morgrensen, Squallshaper Lanara, Lieutenant Granders, Captain Brellinger, and Captain Dashing need to be killed in order to rig the barrels to explode.

From the last vessel rigged, travel towards the port entrance into Theramore where a small group of Horde soldiers, led by Sergeant Brond, await to attack. Speak to Blastmaster Sparkfuse, he will then detonate the barrels destroying the docked warships.

Slay Baldruc and his gryphons.

After defeating the charging Alliance soldiers and the three groups that follow, Baldruc and his gryphons attack.

Stage 4 - Tanks for Nothing!

From the water fountain, travel northwest towards the blacksmithing building, either killing or sneaking past the pathing soldiers and engage Big Bessa. The tank will not need to be tanked normally, as it fixates on party members at random. When Captain Stormwall's tank is destroyed players can proceed to the unmanned tanks and sabotage them. Get away from them before they explode.

After destroying the tanks head east, avoiding the tower where Jaina Proudmoore, Rhonin, and Kalecgos are residing, into the Foothold Citadel. Travel inside killing all the guards and then up the stairs where Hedric Evencane will be found.

Kill him, loot the key and head down stairs into the basement where Thalen Songweaver is being held captive.

When players enter the portal it cuts to a goblin airship flying high above Theramore:

Goblin Captain says: We're gonna turn this place into a sinkhole, heh.
The airship drops the bomb. It explodes!

After Theramore is destroyed the story continues on the Alliance side of Theramore's Fall.

In the weeks before launch of Mists of Pandaria, this scenario was tuned for Level 85 players.

Upon the first completion, Thalen Songweaver would mail players a letter with the

I'd wanted to once more express my gratitude for your assistance in that little... Theramore debacle, as I've come to refer to it. Such a mess. Captured! Me!

In any case, I took the liberty of having a bit of a momento crafted in honor of your deeds.

Is it in poor humor? Perhaps. Although really, I cannot help but giggle every time I see it.

I do hope this letter finds you well. Until we meet again!

Players would automatically receive a

upon completion of the run. The bag most likely contained 5x

[Horde Firework], but may rarely contain any of the following instead: